‘We are losing our soul’: Travellers call for urgent action amid mental health crisis 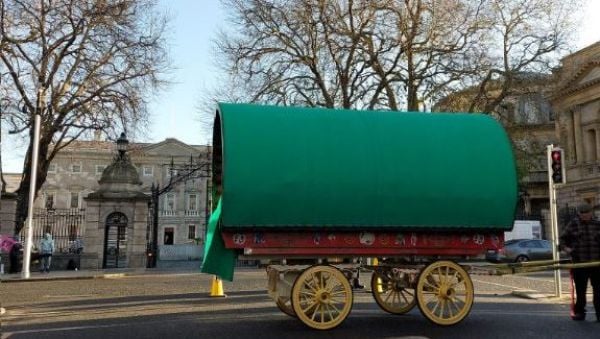 Another protest is set to be held outside the Dáil on Tuesday as the National Traveller Mental Health Network (NTMHN) demand urgent action from the Government on mental health.

Over the last number of years, concerns have been raised over the mental health crisis facing Travellers, with suicide rates significantly higher compared to the rest of the population.

Within the Programme for Government, there was a commitment to publish a Traveller and Roma Mental Health Action Plan, however this is yet to be done.

Asked if there was a timeline for publication of the plan, the Department of Health said: “Publication of the National Traveller Health Action Plan (NTHAP) is a priority area for action in the HSE Service Plan for 2022.

“It is also a priority for the Department of Health.

“The Department met with the HSE in March to discuss the draft THAP and has given detailed comments on its contents. It is now with the HSE to finalise the plan.

“The Department of Health is fully committed to providing the leadership and resources to ensure the implementation of the plan by the HSE, once agreed.

“Further measures will be considered in the context of Budget 2023.”

Meanwhile, 82 per cent of Travellers have been affected by suicide.

Mags Casey, chair of the NTMHN, has lost 29 family members through suicide

Speaking to Breakingnews.ie, Ms Casey said people just have to look at the figures to see the extent of what is happening.

“All the statistics… it tells us about a particular stage in time we are at, that things are actually getting worse for Travellers,” Ms Casey said.

“We are at a more critical time now than we ever were, because we are losing children as young as 11 years of age through suicide.

“I lost 29 members of my family through suicide.

We are burying people every week.

“I have pains in my shoulders from bringing coffins to graveyard after graveyard.

“The reason why I got involved [in campaigning]… was because I don’t want anyone to ever suffer the way I have suffered.

“That’s what keeps me going… for the next generation, that there will be a better Irish society for both settled people and Travellers.”

Meanwhile, the life expectancy for Travellers is 15 years lower than their settled counterparts.

According to Ms Casey, there are several factors contributing to the current mental health crisis.

“The root causes of the high suicide rate is because of deprivation, exclusion, assimilation, poverty, taking away our identity from us, we are losing our soul,” she explained.

Ms Casey highlighted how discrimination and the erosion of Traveller culture is having a detrimental effect on mental health and identity.

“In Ireland in 2002, the trespassing law was passed, and it actually criminalised us for being nomadic,” she said.

“When you take away a group of peoples identity, you actually destroy their soul.

“They have tried to make us like settled people.

“What has happened, systematically, is that we have been dehumanised by different statutory agencies, government policy and Irish society in general.”

Ms Casey also highlighted how the erosion of traditional trades and the keeping of horses has impacted the community.

An IHREC/ESRI report in 2017 found that travellers are 10 times more likely to experience discrimination when seeking work compared to settled people.

Meanwhile, a strategic plan published by the NTMHN highlighted how there is “serious issues” with the lack of appropriate and good quality accommodation for Travellers.

Some 24 per cent of Travellers live in severe housing deprivation, while 39 per cent live in overcrowded accommodation, and five per cent do not having piped water or sewerage supplies.

Campaigners have stressed how cultural, employment, and accommodation issues are all feeding into the current mental health crisis.

The protest on Tuesday will be pressing for accountability from Government over the lack of culturally appropriate mental health services for the Traveller community.

Culturally appropriate mental health services are those which take culture into account for members of a minority or other ethnic group.

This is important because the norms, values and traditions of that group will mean the experiences of those needing counselling will be different compared to the rest of the population.

Reneging on promises to Travellers in the programme for Government. Promises we fought for over many decades. It is time for accountability.
Stand with us in love and unity May 31st 12 noon outside our Dáil. #AccountabilityNow pic.twitter.com/0d7SsVp0NN

According to the Traveller Counselling Service, failure to recognise the differences of a minority or other ethnic group when providing counselling services can reinforce discrimination and inequality.

Ms Casey said there should be culturally appropriate services in every Traveller organisation across the State which will need to work with “generations of trauma”.

“I know that people don’t like listening to us…[but] we have solutions, and we want them brought forward,” she said.

“We are tired, we are not in a delusion any more that we believe these policies are going to be implemented.

“When it comes to Travellers, we are not even on the agenda because it wouldn’t be politically nice to be associated with members of the Traveller community.

“It is not trendy, nor popular to have a voice for us politically.”

Ms Casey urged members of the settled community join the protest on Tuesday in solidarity.

“We can’t do this on our own, we need settled people to stand with us at all times.

“Our people are on their knees right now. They are actually shattered.”