Taoiseach urges use of industrial relations over medical scientists’ strike 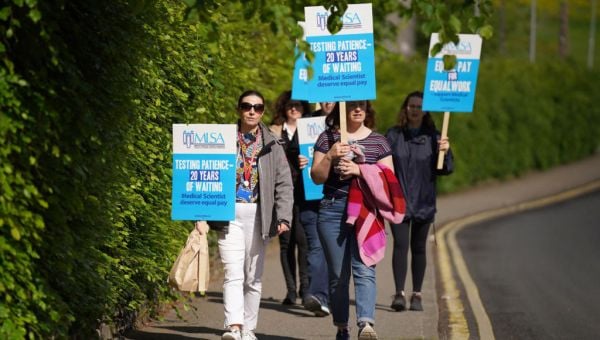 The Taoiseach said that “optimal use” must be made of the industrial relations machinery to resolve the ongoing strike action by medical scientists.

Up to 30,000 medical procedures and appointments have been cancelled as medical scientists take part in strike action.

The scientists have withdrawn routine laboratory services in protest over pay and conditions and will continue their protest on Wednesday from 8am until 8pm.

The action will affect routine hospital and GP services, including the analysis of blood and urine samples, scans and other tests, across the country.

Taoiseach Micheál Martin said the dispute between the Medical Laboratory Scientists Association (MLSA), the Department of Health and HSE should be resolved through the Workplace Relations Commission (WRC) or within the Labour Court.

“In our view, and in my view, optimal use must be made of the industrial relations machinery of the state,” Mr Martin told the Dáil on Tuesday.

“Be it the WRC or the Labour Court in respect of getting this issue resolved.

“There would have been significant informal contact over the weekend and the issue is about getting all sides into the process, into either the WRC or the Labour Court, to get this resolved, within broad industrial relations frameworks, because at the end of the day, Government wants a resolution of this.”

There are around 2,100 members of the Medical Laboratory Scientists Association (MLSA).

“They knew this crisis was coming, and the chaos that would ensure across our hospital systems, but the Minister for Health failed to act.”https://t.co/Pzw89JSFFZ @MedLabAssoc pic.twitter.com/vTWaBwQEaW

Pearse Doherty, Sinn Féin’s spokesperson on finance, said the strike has caused “significant widespread disruption” to the health service, with up to 30,000 medical procedures and appointments being cancelled.

“Medical scientists are on strike today because of a basic lack of respect and recognition of the crucial role that they play and delivery of our health services,” Mr Doherty said.

“They are among the unsung heroes of this pandemic. Medical scientists essentially designed our Covid-19 testing system from scratch.

“Since the first strike action last Wednesday, the Medical Laboratory Scientists Association say that neither the Department of Health nor the HSE has come to them with a meaningful proposal, nor an invitation to talk that could resolve the issues.”

He called for a fresh round of talks.

“We need those urgently aimed at getting a resolution and these talks most crucially involve the Department of Public Expenditure. That’s the department at the end of the day who puts the money on the table, they have to be at the table,” Mr Doherty added.

Social Democrats co-leader Catherine Murphy said the strike is “completely disabling” the health service and shows the importance of the profession.

“It is having serious consequences on patients right across the country,” Ms Murphy added.

“Patient safety has clearly been put at risk, huge negative impact on patients, some of whom have been on waiting lists for many years and seeing long-awaited procedures being cancelled.

“The strike will cause further chaos with delayed diagnosis, delayed treatment, avoidable patient pain and suffering and expanding waiting lists.

“We already have a problem there. Taoiseach, medical scientists are the hidden heroes of the health service and people that patients never got to meet.”

Andrea Byrne Fitzpatrick, an MLSA union representative at Naas General Hospital, said they are a vital part of the health service.

She told the PA news agency that medical scientists are paid about eight per cent less than their colleagues who work within hospital laboratories and are calling for equal pay for equal work.

Ms Byrne Fitzpatrick said around 20 per cent of roles are currently unfilled and that has led to “total burnout” among staff.

“Our work is far-reaching – not only do we deal with the hospitals internally, but we do thousands of GP samples,” she added.

“We’re the last people who want to be stepping up our action at the moment. We’ve always been dedicated to our career.

“We work 24/7, 365 days of the year and the last thing we want to do is hurt our patients. But we’re having severe problems within the sector.

“There’s total burnout from our scientists, and we’re being ignored by the HSE and Department of Health.

“We’re continuing the picket line to resolve unfulfilled posts. The main thing we’re looking for is pay parity with our colleagues who do exactly the same job as us, and we work side by side with these guys, and we have a medical qualification on top of that.

“We’re looking for a career pathway to be structured the same as our colleagues and give us more opportunity. There’s an increase in demand on our service all the time and young people are not encouraged to come into our profession because they can see the lack of service within it.

“We have fewer career opportunities compared to other colleagues, we’ve less training support, and we have less continuous education support than our colleagues,” she added.

“Some 20 per cent of our posts are unfilled and people are not encouraged to come in when they see the hours that we do, and we’re working beside these colleagues getting paid more than us.”

Medical scientists were involved in the rollout and increase of capacity of Ireland’s Covid testing system during the pandemic.

The Department of Health and the HSE have been contacted for comment.