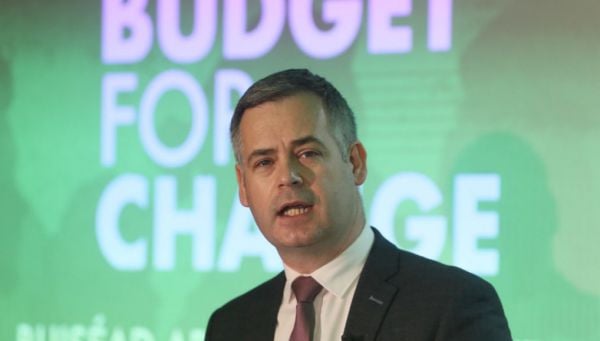 Sinn Féin has accused the Government of “failing spectacularly” on housing.

The party’s finance spokesman Pearse Doherty lambasted Minister for Housing Darragh O’Brien in the Dáil on Wednesday, accusing the Government of failing to tackle the housing crisis.

“Extortionate rents continue to soar with the number of rental properties now at an all-time low.

“Off-the-wall house prices that are up again, beyond the reach of ordinary workers and families and the scourge of homelessness now is returning to the shameful pre-Covid-19 levels.

We are standing up for workers and families as the cost of living rises, and working to fix our health service.

We are working together to build a better and brighter future for all who share this island. pic.twitter.com/YT6hHiCqZI

“And we now hear that your targets for housing are under serious threat due to spiralling construction costs.

“By any objective measure minister, your approach is failing and you are failing spectacularly,” Mr Doherty said.

“On your watch, Minister, things have gone from bad to worse.”

Mr Doherty took aim at specific Government policies, referring to the new Croi Conaithe scheme to support the building of apartments for owner-occupiers.

The scheme has proved controversial, with opposition parties calling it a giveaway to developers.

“And amid this social catastrophe, what do we get from you as Housing Minister?

“A ban on rent increase in and evictions?

“No. A serious ramping up of direct delivery of genuinely affordable homes?

“No. An initiative to cut rents. Not on your watch.”

“What we get instead is a bonkers scheme where you’re going to give 450 million euro of taxpayers’ money to developers to build apartments where there will be no reduction in the prices that would be charged for homeowners. It is absolutely off the wall stuff,” Mr Doherty told the housing minister.

Mr Doherty told the Housing Minister that he had personally told the Dail last week that the purchase price for the apartments in the scheme would be €250,000.

The Sinn Féin TD cited an “unpublished document” circulated between developers and the Housing Agency, which he said contradicted that claim.

“It is straight from the old Fianna Fáil playbook that destroyed the housing system at the start, when you were last in Government,” Mr Doherty said.

“This is a targeted measure to support homeownership in our five major cities across the country, where the supports goes directly to the homeowner,” Mr O’Brien said.

He said the Government was delivering more social homes this year than ever before.