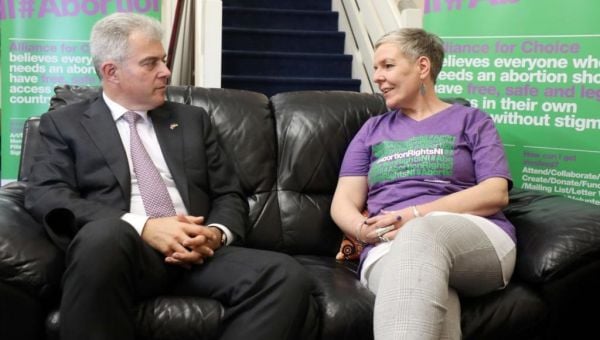 Northern Ireland Secretary Brandon Lewis has said he will move to commission abortion services in the region “within weeks” if Stormont does not.

Mr Lewis said he has both a moral and legal duty to act if there continues to be no movement.

It comes after the UK government took further legislative action last week in a bid to ensure the full delivery of abortion services in Northern Ireland.

Abortion laws in the region were liberalised in 2019 following laws passed by Westminster at a time when the powersharing government at Stormont had collapsed.

However, while individual health trusts in Northern Ireland currently offer services on an ad-hoc basis, the Department of Health has yet to centrally commission the services due to a political impasse on the issue.

The DUP, which is opposed to abortion, has refused to agree to the issue being tabled on the agenda of the ministerial executive.

The regulations laid at Britain’s parliament remove the need for the Department of Health to seek the approval of the Stormont Executive to commission the services.

That means Stormont Ulster Unionist Health Minister Robin Swann, who remains in post in a shadow capacity despite the powersharing crisis, can now move to roll out the policy.

On Wednesday Mr Lewis met with volunteers in Belfast who support women through termination services.

Mr Lewis told the PA news agency if he does not see “positive steps in the very, very near future”, referring to a timeframe of “weeks”, the UK government will take the action.

“If they don’t take action, there is a secondary point in what we did last week, which is that we have now taken a power so that the Secretary of State, I, can act, I have got the legal basis to act and commission services directly in Northern Ireland.

“I have said all along this should be done by the devolved administration, but if it’s clear that the devolved administration won’t do it, I have a moral duty to act because I do think women should have access to proper healthcare the same as they do in the rest of the UK, but I also have a legal duty on me from the 2019 act that parliament passed.

“We’ll see what happens with the Department of Health but we’re not going to leave this very long. If they haven’t shown positive steps in the very, very near future, then we’ll take the action to commission services.”

He is also putting together a team of experts within the Northern Ireland Office for commissioning the services.

“Let’s see where the Department of Health gets to in the next couple of weeks but I think after the amount of time they have had, and the lack of services available to people who need it, I think we’re talking weeks rather than anything further,” he said.

Mr Lewis met people who provide support and advice, as well as people who have used abortion services.

“There are some really harrowing stories about what people have to go through,” he said.

“Although they are all very strong ladies and individuals, in one particular case telling me about their own experience, no one should have go through the time things took, and because they are clearly a very strong individual, they were able to work through, effectively combating a system to get the support, the service that they needed. It shouldn’t be like that.

“It can be quite shocking actually, what people are having to go through to access services.”

Mr Lewis also paid tribute to the volunteers who support women through terminations, describing it as “very powerful” how they come together.

“They really care about making sure that people have got some support and that bond and that strength of character … but it shouldn’t have to be like that, relying on volunteers because there isn’t a commissioned service,” he added.

Mr Lewis said he has also met with pro-life campaigners.

“I respect if some people are very pro-life, freedom of speech works both ways, but that doesn’t mean we shouldn’t be providing the service and making sure we do in a safe environment for people,” he said.

Among those Mr Lewis met were Alliance for Choice volunteer Claire Hackett, 39, from Dungannon, and Katie Boyd, 40, from Belfast, who went through the experience of a termination.

Ms Hackett said it was “good to hear a firm commitment” from Mr Lewis about a timeline for taking action.

Ms Boyd said: “I wanted a space to tell my story and let him know where I felt that the service failed me and therefore if it failed me, potentially, where it is failing other women.”

Ms Boyd said she had found the service “in an underground capacity” much more compassionate and kinder, whereas she said it became “less straightforward” after abortion was decriminalised.

“It was brutal, it was really traumatic,” she said, describing how she desperately sought information about services and heard nothing for a month.

“I was stuck and that’s when I got in touch with Alliance for Choice. There were then complications after that, I got a call from the clinic a month after I first reached out which would have taken me over my gestational limit, so had I not been able to access the pills in that interim period, I would have had to travel for a surgical abortion.”

A spokesperson for Mr Swann said: “The Secretary of State’s written statement and new regulations are being given careful consideration by my department.