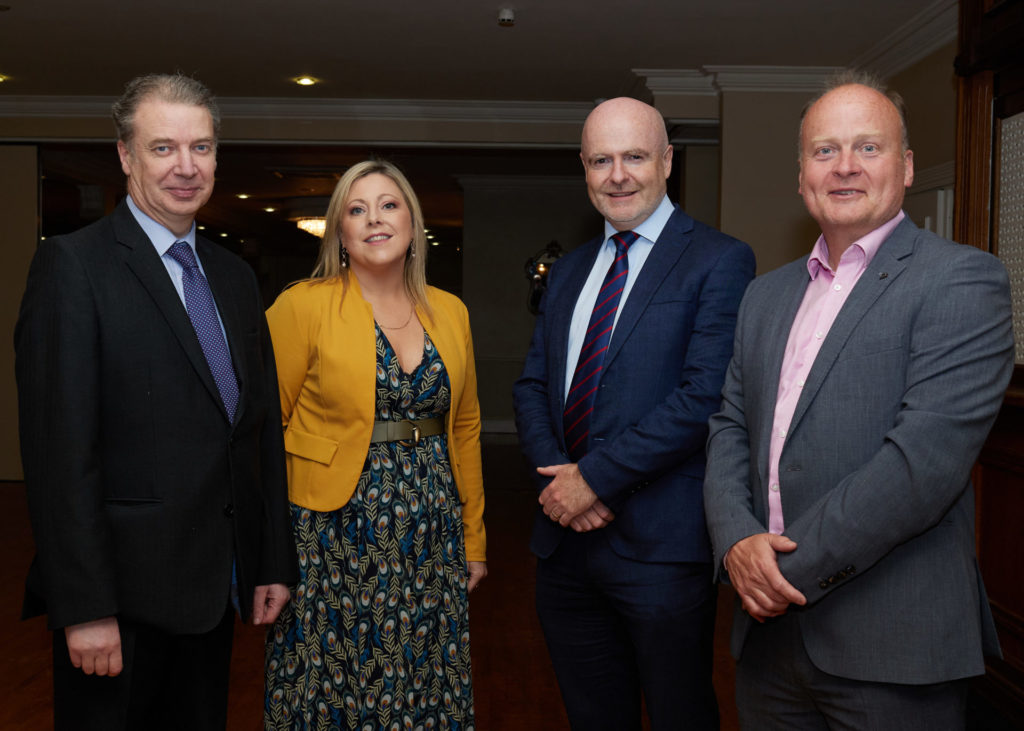 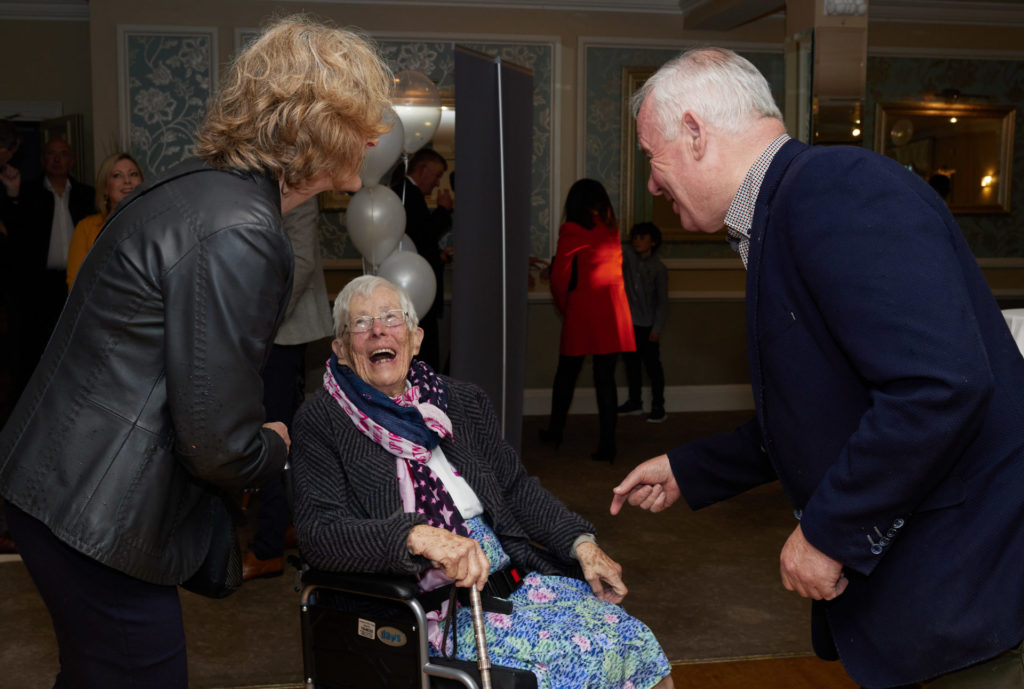 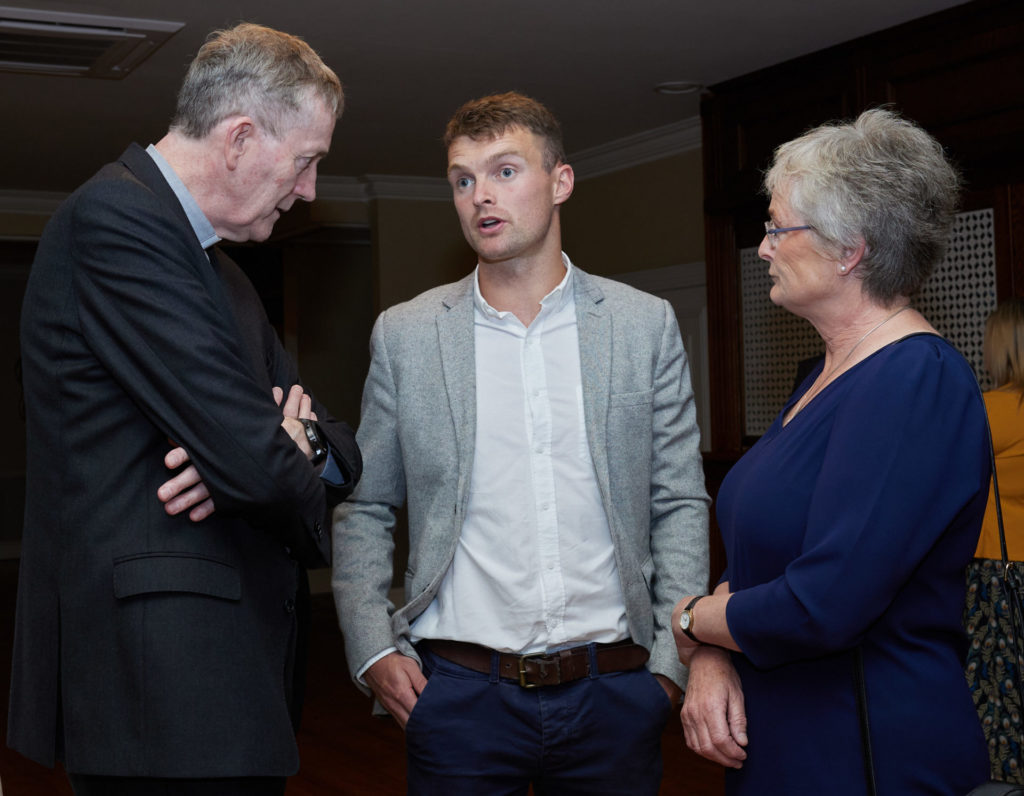 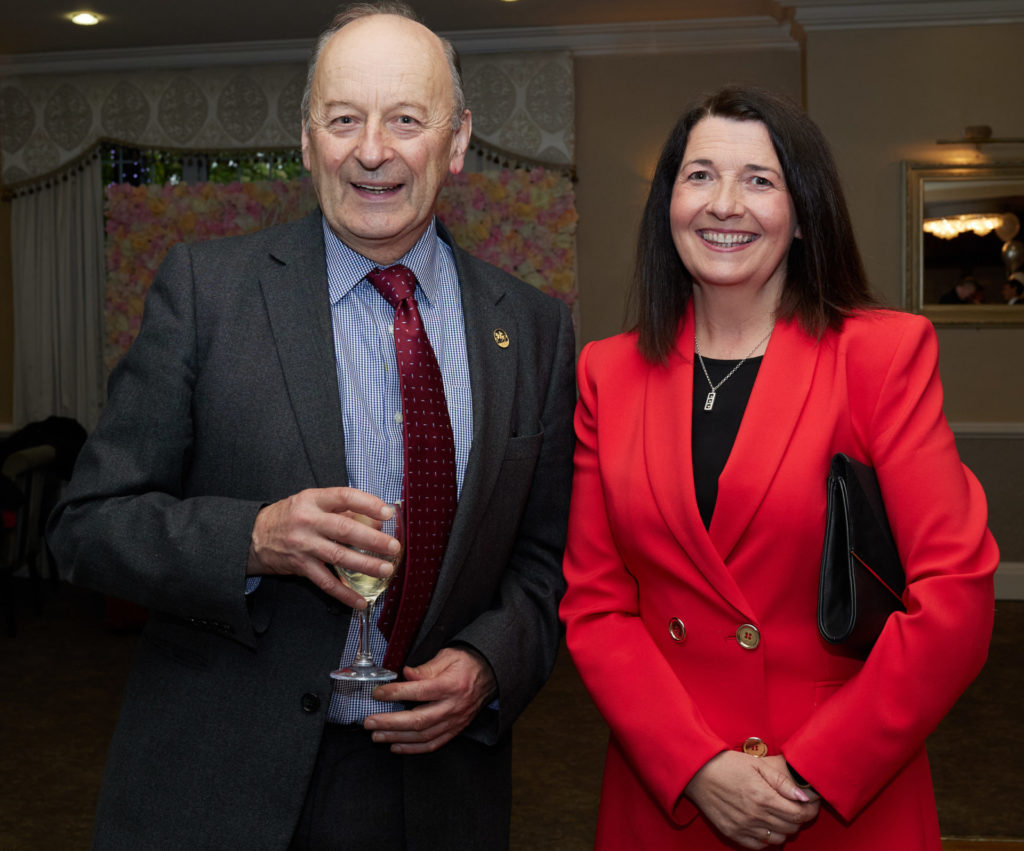 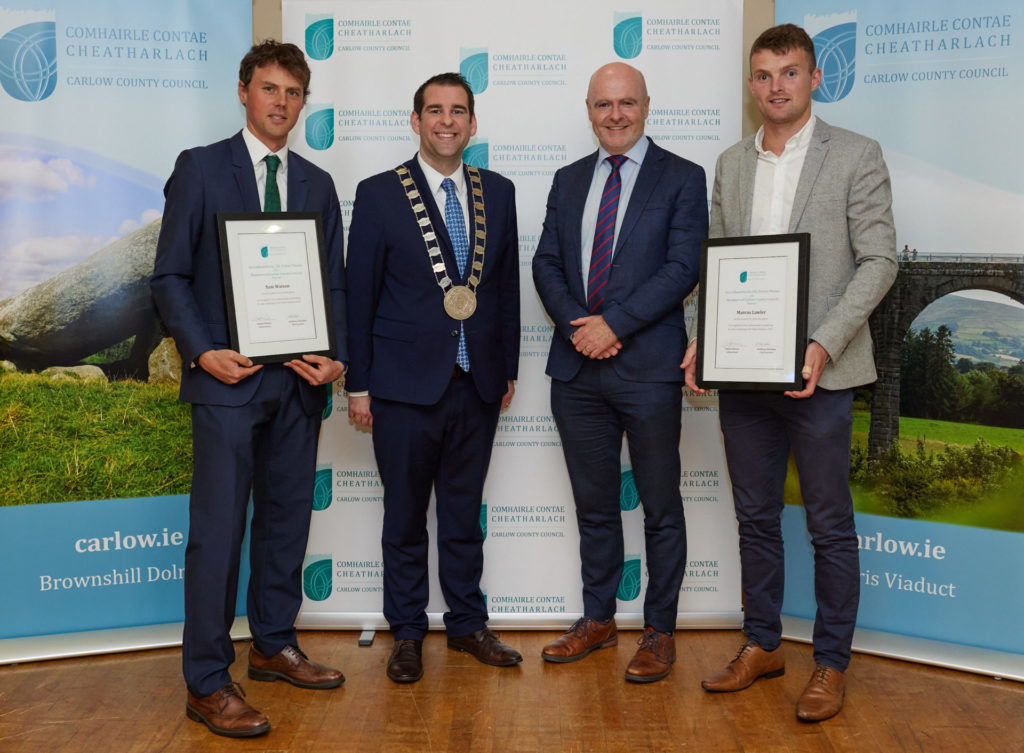 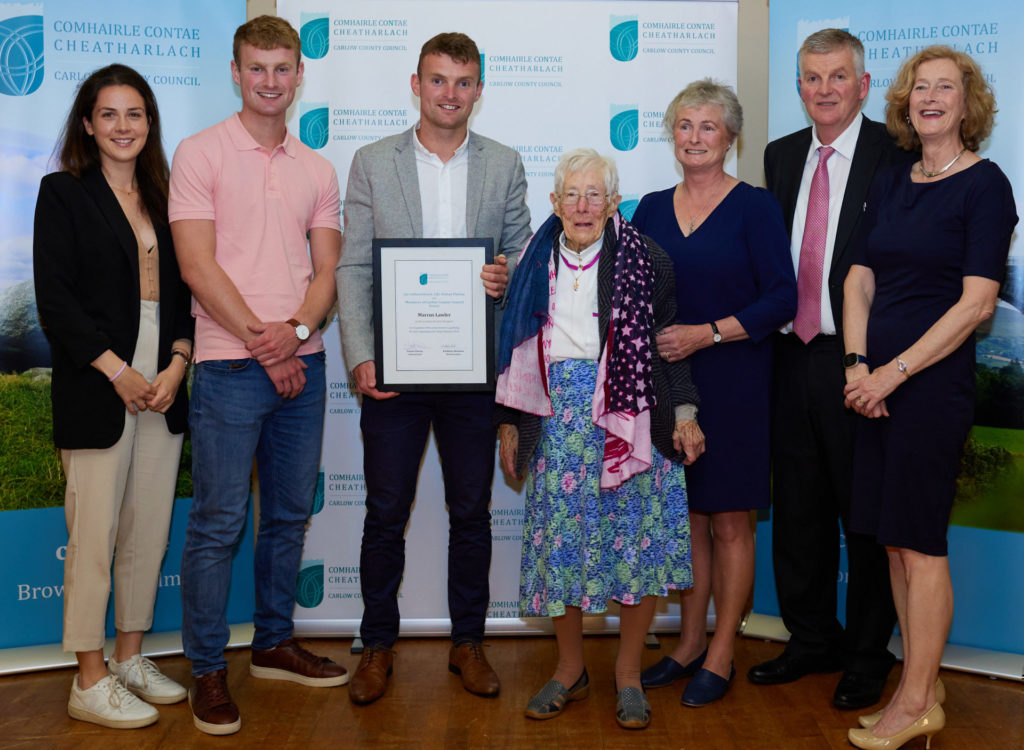 Marcus Lawler with his family during the civic reception in the Woodford Dolmen Hotel in recognition of his achievement in qualifying and competing in the Tokyo Olympics of 2021, his parents Patricia and Tom, his brother Maurice, aunt Patricia Amond-O’Brien,  grandmother Lena Amond and girlfriend Muireann O’Sullivan, missing from pic is Marcus’ s sister Grace 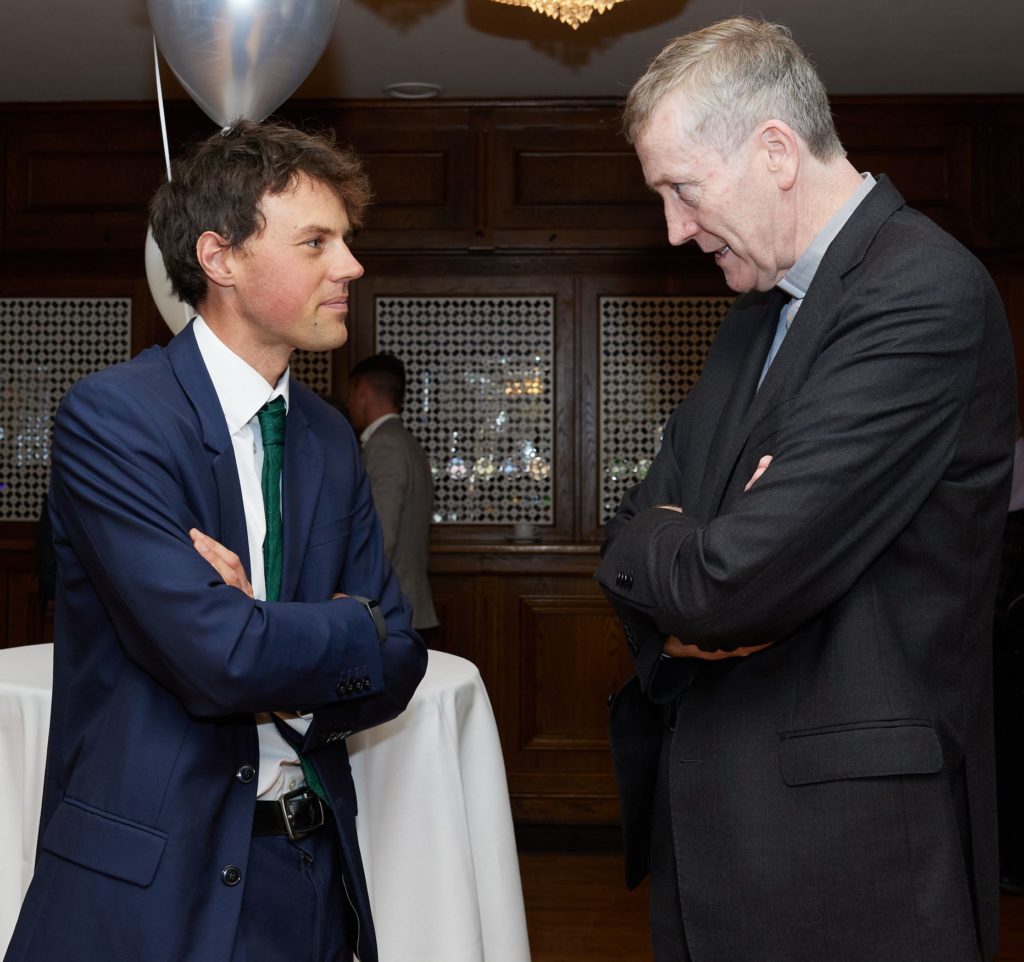 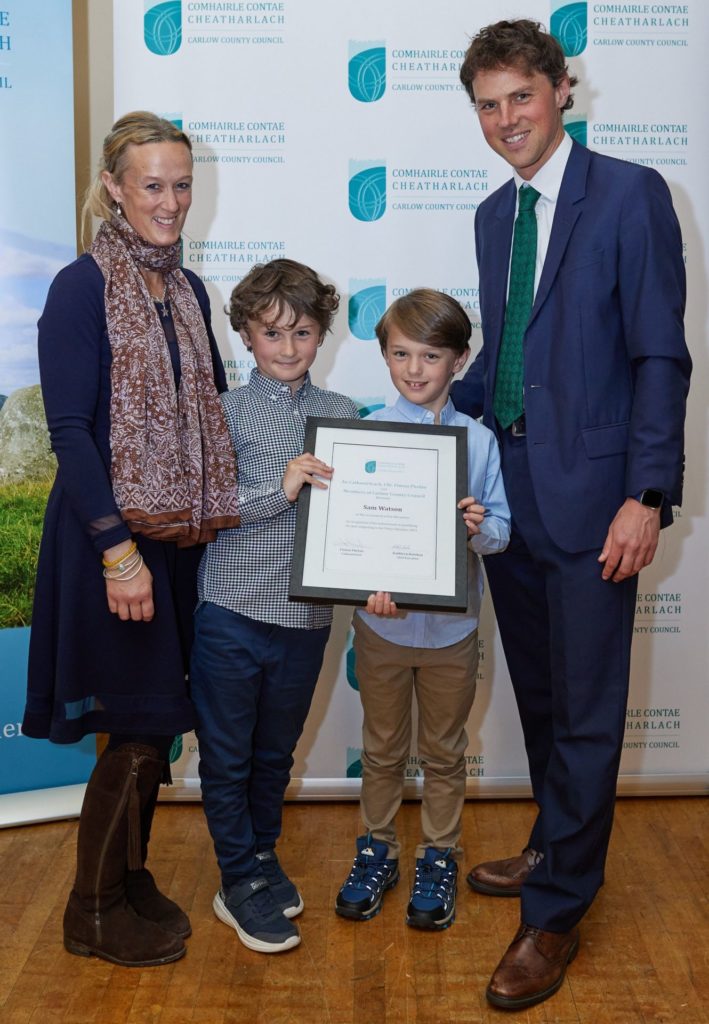 Marcus and Hannah Watson  with their children Archie and Toby 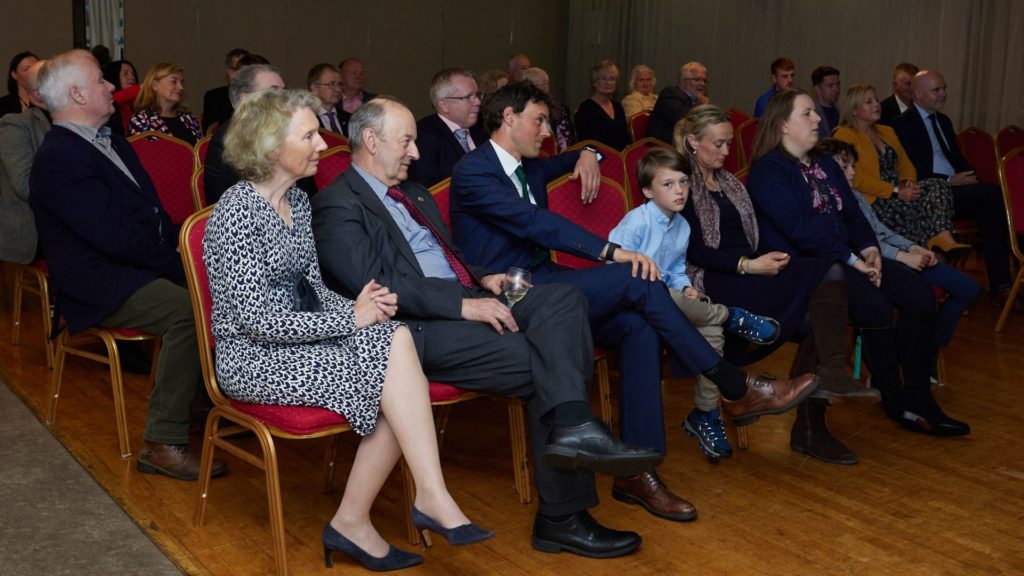 Some of the attendance at the civic reception last Wednesday evening 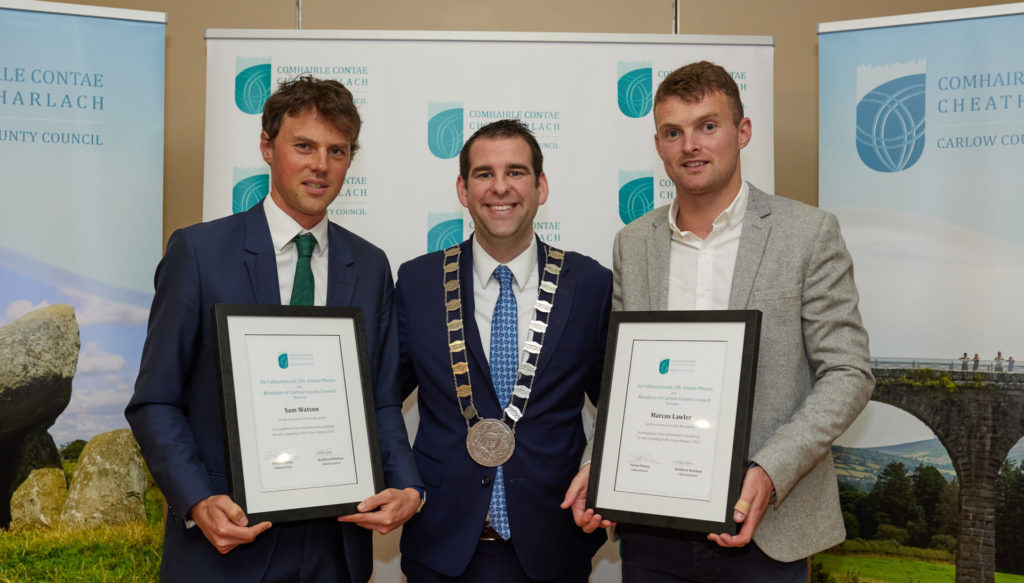 TWO Carlovians who joined the ranks of an elite group of sportspeople who can proudly call themselves Olympians finally got the chance to be officially recognised for their remarkable achievements.

Last Wednesday night, a civic reception was held to honour Marcus Lawlor and Sam Watson, both of whom represented Ireland on the world stage in the Olympics Games at Tokyo 2021. The pair proudly flew the flag for Ireland and, indeed, Carlow at the Olympics, showing a real determination to secure their place among the world’s best and equipping themselves admirably at the games.

The civic reception was held in the Woodford Dolmen Hotel and welcomed members of the Lawlor and Watson families, among them Sam’s wife Hannah, their children Archie and Toby, his parents John and Julia, Marcus’s parents Tom and Patricia, brother Maurice, girlfriend Muireann O’Sullivan, grandmother Lena Amond and aunt Mary Amond O’Brien.

Also attending were a number of local dignitaries and the many who have supported and influenced Marcus and Sam’s careers to date, including Donal McNally, director of sport at South East Technological University; Declan Doyle, its vice-president for development and research; Georgina Drumm, board member of the Olympic Council of Ireland; John Cronin, president, Athletics Ireland; Shane Aston, regional development officer with Athletics Ireland; Denis Duggan, chief executive of Horse Sport Ireland; and Frank O’Mara, director of Teagasc, Oak Park.

Cathaoirleach of Carlow County Council cllr Fintan Phelan welcomed all to the occasion and spoke of how, having endured over a year of restrictions and gripped by a global pandemic, the Olympics was a much-needed moment for celebration, for our county to “cheer on two of its own and provide us all with great hope”.

“The conferral of civic honours, as prescribed by legislation, is an opportunity for Carlow County Council, the lead civic authority in our county, to honour a distinguished person for their achievements. Today I am delighted to confer civic honours on Marcus Lawler and Sam Watson for their achievements in qualifying and competing in the Tokyo Olympics,” said cllr Phelan.

Cllr Phelan said that at the age of 27, Marcus has achieved a huge amount in athletics, both at home in Ireland and internationally. For the last decade he has been at the top of Irish sprinting, holding national titles at various points in the 200m, 100m and the 60m indoors.

“Having secured a high world ranking in the 200 metres, Marcus qualified for the Tokyo Olympics. I think I can safely say the entire county got up early on the morning of 3 August to cheer Marcus on and to see him running a time of 20.73 and a season’s best,” said cllr Phelan.

“A fantastic achievement, and one I know he is keen to build upon,” he added.

Cllr Phelan welcomed members of Marcus’s family to the civic reception, including his mother Patricia, a top-class athlete in her own right, who has trained and guided Marcus throughout his career.

“I know that Marcus has got great support from our university here in Carlow, the South East Technological University. The university has a long track record of supporting excellence in sport and I have no doubt they will continue to do that with their new state-of-the-art track.

“Marcus is a fantastic ambassador for our county. He gives a huge amount back to Carlow and its young people. I witnessed this on several occasions, most recently at the Community Games, where he spent hours with younger people, chatting and encouraging them.

“You are a true role model for the young people of this county,” said cllr Phelan.

Turning his attention to the next recipient of civic honours, cllr Phelan spoke of how, in 2002, Sam Watson broke onto the international stage in equestrian and has competed in three World Equestrian Games and contributed to three top-ten team finishes.

“At the 2018 World Equestrian Games, he had an excellent individual performance, placing 14th, which helped Ireland to a historic team silver. With these results, his place on the Irish Olympic eventing squad for the Tokyo games was well earned,” said cllr Phelan.

“Sam, riding Tullabeg Flamenco, represented our county and country to the highest standard at the Olympic Games and they proved a confident combination.”

He added that Sam combines his sporting excellence with his professional career, having co-founded the sports data and analytics company EquiRatings.

“The achievements that I have outlined of both Marcus and Sam are remarkable. Qualifying for an Olympic Games is no small task,” said cllr Phelan.

“Marcus and Sam now join a select group of Carlow athletes who have represented Ireland on the biggest stage of them all. To have two Carlovians compete in the one Olympic Games is something we are hugely proud of and is a significant occasion for our county.”

Cllr Phelan concluded with a message that he’d received from one of Carlow’s Olympians – the great TJ Kearns: ‘Congrats to Marcus and Sam and I wish them all the very best in their future sporting careers. Keep the Carlow flag flying at international level and roll on the next games.’

“TJ represented Ireland at three Olympic Games and I know these two gentlemen here today have the ability to do the same,” said cllr Phelan.

Cllr Phelan also offered his thanks to council staff, who organised the civic reception, in particular Lorna O’Callaghan and Sarah Byrne.