THE All-Ireland Intermediate Camogie Championship opened on Saturday with Galway beating Laois by 0-20 to 0-12 in Ballinasloe. Carlow have the unenviable task of travelling to the same Galway venue for their first game this weekend, with a ground still to be confirmed at the time of going to press.

The following week they will be at home to Kerry. Carlow captain, Katie Garry Murphy, won a University All-Ireland medal this year when DCU won the Ashbourne Cup.

She knows her way around camogie fixtures mixing realistic expectations without making false promises. She is glad to be playing in the intermediate rather than the lower junior grade.

“Galway is a big county but they are developing their seniors through the intermediates. We will give it our strongest shot but they are probably the best team in the group.

“The last time we played Kerry at the IT in Carlow, we threw that game away. We could have won it. Let bygones be bygones. We have forgotten about that now,” she stated.

On Sunday her Naomh Bríd club were beaten by Myshall in the Carlow league final in St Mullins. She is one of the lucky ones where she has been playing college sport, intercounty and club camogie. Balances have to be found and she says the Carlow manager, Mark Ayres, has helped in this regard.

“I decided last year because I was up in college to travel down to training with Catherine Kavanagh. The days we were training with DCU for the Ashbourne, they were really understanding. They gave us space and then when we came back they understood what we could take on and what we couldn’t. I am really enjoying that. They have also given us a leeway with the club and with Carlow. 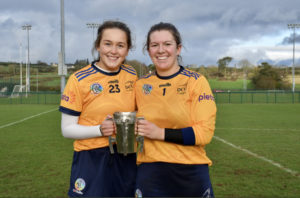 “With the mix we wanted to get the league wound up and now for the next two weeks we fully commit to Carlow,” explained Katie.

At the start of the league Carlow struggled to field a team. That has changed but the profile is young.

“We are relatively new with the intermediate side and it is nice to build with this Carlow side. They are a new panel. Very young and we are looking to Laois and Kerry in particular. If we show up, perform, we could get a result. We would be happy with that,” the captain says.

Katie says the absence of the joint-captain, Mairead O’Shea,  because of a cruciate issue is a loss not just for the player but for the team as well.

“It is heart-breaking to see her.  She is so dedicated. She was a central player and owned that centre-back position. When I was coming into the intermediate set-up, she was central then. She is determined and we will get her back,” promises Katie.

Manager, Mark Ayres, has had to start building from the bottom up. For him, every game cannot be treated equally. Laois, Westmeath and Kerry will bring their own challenges but Galway and Dublin are as tough as one can get at this level. Especially for a new team.

“We are under no illusions. Galway will be favourites. We know that and we will be looking  to Westmeath and Dublin in particular as vital games. We will be targeting Westmeath, who like ourselves, were struggling in pre-season. They were in the very same position as ourselves and we will see who will come off the better,” Mark suggests.

Then there were long spells during the pandemic where players couldn’t train together.

“The development squads were hit hard. I have talked to a lot of managers across the county who have struggled with the issues around Covid.”

While the ripple effects remain, managers now have to get the best out of the players.

“We have to concentrate on our own performance. We are building for this year. Hopefully building and getting stronger. I want to players to buy into it and get stronger.”