A simple meeting and a conversation between top officials in Carlow GAA and Crime Prevention Officer, Peter McConnon, has sparked an enterprising and unique awareness programme to inform players about the consequences of taking drugs. 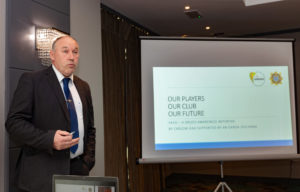 In an initial gathering, jointly hosted by Carlow GAA and the Carlow and Waterford Garda Crimes Unit, 21 out of 26 GAA clubs were represented with two more clubs sending their apologies.

During the meeting held in the Talbot Hotel on Tuesday last, 4,000 Drugs Ruin Lives flyers were distributed to clubs with the Health, Education, Enforcement and Drug-driving (HEED) message emblazoned on the literature. Clubs were urged to drive home the message by providing information to club members through  flyers, banners and posters. Delegates were asked to make sure the message was clearly visible to anyone who visited their GAA facilities.

“This is a partnership programme building resilience through a community wide front,” noted McConnon.

Many of the Gardaí who addressed the delegates are themselves involved in the GAA in some form or another.

Inspector Alan Kissane is a Tipperary referee who is based in Carlow. McConnon himself is a former Kildare senior intercounty footballer who has strong links with the Palatine GAA club in a coaching capacity, and previously managed the Carlow under 21 football team.

Many more members of the force addressed  delegates. These included Sargent Conor Egan who, as well as being  in charge of the community policing unit is a child protection officer in Palatine GAA. Fergal O’Connor is in the  Drugs Unit in Carlow while Sargent Paddy Kelly is involved with the GAA in Myshall.

Most delegates would not have known what drugs looked like. Samples  were passed around in plastic bags for delegates to examine so that they would recognise them if they came across them in their clubs.

Inspector Kissane  promised they “will provide clubs with experts to talk to officers, coaches and players.”

Ber Horohan of O’Hanrahans, who is an underage intercounty coach in Carlow, does voluntary work with Cuan Mhuire family support and has seen first-hand the damage drugs inflict on families. 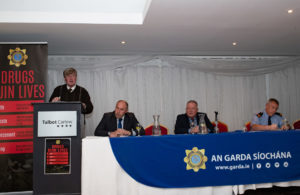 “People are affected by their loves ones who are drug users. Every person who uses hard drugs started with soft drugs. There is a problem. We have a generation coming behind us,” Horohan pointed out.

He urged delegates to ask themselves “have they a problem in their own club.”

Peter McConnon wants club representatives  to go back to their clubs and discuss ways to bring this initiative forward.

Carlow GAA President, Tommy Murphy, and Carlow Chairman, Jim Bolger, are hoping to drive the initiative with a major input from Gardaí who are tackling the issue of drugs on a daily basis. 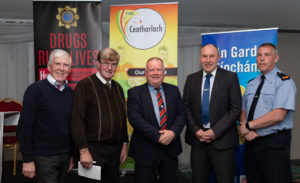 Carlow Chairman,  Jim Bolger, said it would be remiss not to do something.

“We have to get the message across. Drugs damage your health.

“The Gardaí have given us a great insight. We want to listen to the issues. It is a massive challenge and education is the key to this.”

“Tommy and Jimmy approached me saying they needed to be as proactive as they can in relation to a problem which they see within the GAA community and drug abuse.

“They were coming with a fact-finding mission to see what can be done. I was delighted they did. I asked them exactly what message they wanted to send,” added McConnon.

The high-ranking Garda said there had been an earlier initiative within the Gardaí to go into communities but it had to be put on the back-burner because of Covid. At the time, there would have been a lot of face-to-face contact  so now when the GAA came up with their idea, McConnon saw this as an opportunity to revisit the earlier Gardaí initiativve.

You can listen to the full discussion between Peter McConnon and Kieran Murphy here.