AS Carlow take on Tipperary in the inaugural Tailteann Cup next Sunday, 29 May, Carlow GAA are making a determined effort to promote the competition and bring a big crowd to Netwatch Cullen Park to cheer on the home team.

“There’s an onus on all participating counties to support the Tailteann Cup and to make it a meaningful competition that Division 3 and 4 teams will aspire to winning. The Carlow senior team went straight back to training after their Leinster Championship defeat to Louth and manager, Niall Carew, and the County Board are taking the competition very seriously.

“With this being our first ever game in the competition, we want to create a festival atmosphere on the day and are inviting every child under 16 to come to the game FREE of CHARGE and take part in a half-time Raffle for one of four new Carlow GAA jerseys AND a bag of O’Neills practice balls for their school.  The free tickets will be distributed to the schools and clubs this week and there’s also a ticket printed in this week’s NATIONALIST. 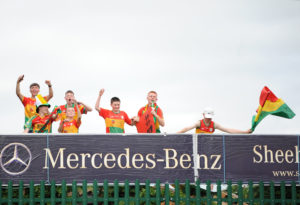 Carlow GAA are encouraging supporters, especially younger fans, to get to Netwatch Cullen Park on Sunday and cheer on the county footballers in their first ever Tailteann Cup game
Photo: ©INPHO/Tommy Grealy

“It’s important to note that you must be in Netwatch Cullen Park when your ticket is drawn to claim the prize.

“We will also be holding GoGames at half-time with eight teams of ten players participating which is sure to generate a buzz and a lively atmosphere.

“The weather forecast for next Sunday is good so why not come to Netwatch Cullen Park, enjoy a traditional GAA afternoon and hopefully cheer Carlow to victory …… and maybe take home a new Carlow jersey. ”