Clarke aiming to make the most of Tailteann Cup

SHANE Clarke, the Bagenalstown Gaels and Carlow intercounty footballer has mixed feelings about the Tailteann Cup but says the competition has to be given a chance. There have been so many contrasting opinions floating around, people are changing their minds from one day to the next. The draw is made now and already Wexford and Waterford’s seasons are over having lost to Offaly and Wicklow respectively. 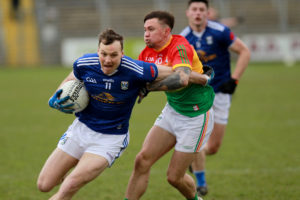 Shane Clarke in action during the league game against Cavan earlier this year
Photo: Adrian Donohoe.

“It is hard to know. Realistically, we would like to be in the All-Ireland proper and get more runs. I don’t know. It gives Carlow a chance to play for a trophy. It is a good incentive for such a young team,” says Shane.

“Tipperary and Westmeath will be favourites in the southern side of the draw. We have nothing to fear and is a good opportunity to get to Croke Park. The semi-final is in Croke Park as well.”

Carlow got a mauling in Navan from Louth in the Leinster Championship. Yet the following Wednesday they were back together as a group. The players met in the gym under the Netwatch Cullen Park stand where, on the pitch, Carlow were playing a minor championship match.

“It is probably one of the best dressing rooms I have been involved with in the county. Everyone gets on. On the Wednesday, we wouldn’t start until the Dublin boys got in. That was good. We supported the minors while we were waiting,” recalled Clarke.

“There has been a very good reaction. I know it is hard to stay going five weeks of a break. Everyone stayed together and pushed hard in training. We had Monday and Tuesday off. A good session on Thursday and the weekend off to get our minds off it.”

Patience is the key for Clarke whose brother, Jamie, has been one of the players of the year. Last year, if there had been a player of the season award, Brian Murphy of Rathvilly would have won it. Not far behind him was Jamie, brother of Shane, who was a livewire and almost impossible to stop. He brought this into the county set-up this year. Shane sees this at close hand.

“We would be very close. We travel to work together. We travel to training together. Anytime I get the ball, it isn’t that I would be looking for him but he is in positions for me. He is always looking in between the lines for us. He has been one of our best players this year. He gets going for us.”

Now comes Tipperary and The Tailteann Cup. According to Clarke,  a  2-16 to 0-11 NFL 4 defeat in their penultimate game doesn’t tell the full story.

The Bagenalstown man says it won’t be the same as the league.

“The first half we went in only a few points down and we were hoping to push on in the second half taking it to them. We gave away a few balls and they got a few scores. They got a goal from one of our mistakes.

“That killed us a bit. Especially with a new team, it is hard to know how to react. Losing Eoghan Ruth to a black card didn’t help either.”

And is the Tailteann Cup here to say?

“This is a new competition. We know ourselves we are a team in transition. We have very young players. Good players coming through. It was always going to be hard to follow the team who got promotion,” says Clarke.

“After this year, we will be able to see how successful it was. I think it is up to the GAA to take it seriously as well rather than having us in the background playing away,” suggests Shane.