PALATINE’S Conor Crowley has featured in all of Carlow’s games this year either starting or coming on. One O’Byrne Cup, seven league games and that Leinster championship game against Louth. He doesn’t play with his club but he is in good company. The likes of Éire Óg’s Colm Hulton, Eoghan Ruth and  Jordan Morrissey were all over in Rathvilly for the league clash between the clubs. 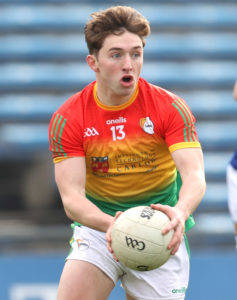 Offering support? Twiddling their thumbs? Call it what you like.  You can be sure they would have loved to have been on the pitch. This is a scenario repeated on pitches around the county. In fact, probably in grounds all over the 32 counties. The change in the fixture calendar means that he won’t be playing for this club when they play in the Senior Football League Division 1 semi-final this weekend. When the Tailteann Cup is over, Conor is heading to Chicago to play football in America, but will be back for the senior championship.

“I would love to play a few games with Palatine. At the same time, it didn’t suit, I have had games with Carlow and that is my first priority. I need to be fresh for that,” he muses.

That is only one aspect of being a senior intercounty player.

“At the moment we have three pitch sessions. I have just finished college and am living in Dublin so we would be down three times a week for training. Tuesday, Thursday and Saturdays. You would be looking at two if not three gym sessions on top of that. I know the lads in Carlow do the gym sessions collectively and just to save another trip down, the lads here do it in Dublin.”

He wouldn’t change the lifestyle for even a minute. Success is or no success. Just because Carlow are not winning too many games, his attitude will not change.

“I do realise what we are signing ourselves up for. If we want to go in the right direction, that is the kind of commitment that is needed over a couple of years. Since I have been in with Carlow, the commitment in the team is very good but it is time consuming. Especially driving to Dublin with the traffic at 5.30 and getting back up there after training and video work between 10.00, 10.30 or 11.00pm.”

He loves being handed the jersey.

“It is absolutely a huge honour. As a young fella growing up that is the goal. That is where you want to get to. Getting on to an under 14 team. Getting on to a minor team. Now playing on the seniors.

“Anytime, pulling on that jersey is a great honour and I would be full of pride. It is the highest level of football you can get too and to be out there representing your county is an amazing feeling. For my family,  it means to much.”

He has just completed his Masters. One of Palatine’s finest is off the America when Carlow’s intercounty season ends. He will be back just before the start of the Carlow senior championship. Carlow might be in transition but so too is Conor. On his return, he is making the change from being a student and will be entering the work-place on a full-time basis.

“I am loving it. I have a big interest and have enjoyed my football this year. It would be great to have better results but this is a transitionary period and we are going in the right direction. There are good people around the team, good strength and conditioning coaches and with new lads in next year we would hope to compete. That will be the goal for next year,” he concludes.