CARLOW began the Tailteann Cup with a bang today with a brilliant 1-12 to 1-10 win over Tipperary at Netwatch Cullen Park.

Not too many outside of Niall Carew’s camp gave Carlow a chance going up against a team who were champions of Munster as recently as 2020 and who were promoted from Division 4 this season. During that Division 4 campaign Tipperary beat Carlow by 2-16 to 0-11 in late March but the formbook was turned on its head in spectacular style today. 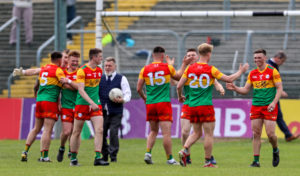 An initiative to grant under 16s free entry to the game worked superbly and there was a big support for Carlow as the game got underway but they suffered a major blow when Martin Kehoe landed a goal for the first score of the game for the visitors.

Despite that setback, Carlow regained their composure and got back at Tipperay and the likes of Darragh Foley, Eoghan Ruth and Ross Dunphy clipped over points. However, a free from Sean O’Connor just before the half hour mark put Tipperary 1-5 to 0-4 ahead.

It was imperative that Carlow closed that gap before the half time break so when Niall Hickey hit the back of the Tipperary net in the 31st minute, it was a perfectly timed score.

That left the score at 1-5 to 1-4 at half-time but what followed was probably the best half of football so far in Carew’s time in charge of Carlow.

Conor Doyle levelled in the 46th minute and then Colm Hulton and Conor Crowley followed on with points to push Carlow two clear with 19 minutes to play.

Tipperary momentarily reduced the gap back to a point but Carlow then enjoyed their best spell of the game with three points in a row, Seanie Bambrick with the last of that trio of scores to make it 1-11 to 1-8 in the 63rd minute.

“Carlow are playing like Kerry,” roared Brendan Hennessy on his KCLR commentary, as Carlow turned on the style.

However, the job wasn’t done yet and six additional minutes added on at the end of the game gave Tipperary renewed hope.

They cut the lead to two before Jamie Clarke converted for a crucial point.

Again, Tipperary cut the Carlow lead back to two and the home side had over a minute to defend the most dangerous lead in the game – but defend it they did and they hung on for a famous win.

Carlow now enter the sourthern section quarter-final draw which will take place tomorrow morning at 8.35am. Carlow’s potential opponents are Westmeath, Offaly or New York. First team out of the hat will have home advantage in the quarter-final, unless that New York who will be travelling to Ireland for their quarter-final no matter what way the draw lands.

For full coverage and reaction to this brilliant win, see Tuesday’s edition of The Nationalist.