CARLOW have been rewarded for yesterday’s thrilling win over Tipperary with a home draw in the quarter-final of the Tailteann Cup after they were paired with Westmeath in this morning’s draw. 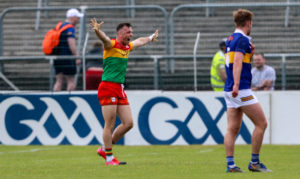 Westmeath played in Division 3 of the Allianz League this year and reached a Leinster semi-final before losing by just three points to Kildare. They reached the Tailteann Cup quarter-final by virtue of a 1-13 to 0-13 win over Laois yesterday, despite being at a numerical disadvantage for the majority of the game after the first half dismissal of Kevin Maguire. As it stands, the full-back is suspended for the clash against Carlow but Westmeath manager Jack Cooney indicated after their game that they would explore avenues of appeal.

Carlow will go into the game on a high after their brilliant win over Tipperary and will no doubt be looking for the backing of a sizeable crowd again next weekend to aid their cause against the Midlanders.

Games to be played next weekend.