THE majority of the soccer season is done and dusted now with all European competitions and the English leagues finished but that doesn’t have to mean the end of live soccer for those supporters. While a lot of Irish fans support English soccer teams, I think some of them are missing out on something staring them straight in their faces with the League of Ireland season in full swing now.

Some supporters of English clubs will always look down on the League of Ireland and say its not like the Premier League and it isn’t to that level, but they don’t realise how big an impact the league has had in the past and will have in the future of our international sides at all age groups.

For lots of the young players playing in the league they will be trying to use the league as a stepping stone for them to move on to bigger and better things and there is nothing wrong with that. It has been a great starting point for the likes of Gavin Bazunu, Cheidozie Ogbene, Liam Scales and Jamie McGrath to name a few in more recent times and they are all at the beginning of their international careers. For some of the more senior members of the squad in the last few years it was equally as important for almost their football apprenticeships. Seamus Coleman, Matt Doherty, Shane Long and James McClean have all had stellar international careers all stemming from their development in the league. These are players that in the past might have been completely missed out on maybe because they are late developers, but they have been brilliant for their country and have never let us down. 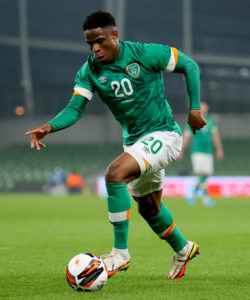 Chiedozie Ogbene is the latest player to make his mark with the Irish senior team after starting out in the League of Ireland
Photo: ©INPHO/James Crombie

You also get the players who are coming back from poor stints in the UK where they have just been promised the world by clubs at 16 only to be cast aside by the time, they are 20 and they have become homesick or disillusioned with the game. Coming back to Ireland can help them reignite their passion for the game and also become more mature so when the chance comes back around to go across to England again, they are more equipped to deal with the pressure of being there but this time around being an adult there.

For Carlow people there is always a dilemma of who to go and watch because of our location. Do we go to watch Waterford or what Dublin team do we go and watch play? There are many supporters of the league both mens, and especially womens lately too with the strong influence of players from Carlow and Laois playing for Wexford Youths womens, and it is great to see but there can always be more. The people who are always the most critical of the League of Ireland are the ones who have probably not stepped foot inside a league ground to watch a game or if they have, they have given it one go and made their decision based on that game. But there has been plenty of one-off games in the Premier League that have been very poor, and people always go back looking for more there.

This year the attendances in the League of Ireland have been fantastic and long may it continue. The future of Irish soccer needs a strong league and a good breeding ground for these young players now more than ever. With the new Brexit rules players aren’t going to be going over to the UK at 15/16 years old so we need to develop them at home and make them as good as they can be to be ready to make the move across eventually. You are going to see less players moving now though even after they reach the age of 18 because transfer fees will be due now and not just compensation fees so the clubs in Ireland will have a stronger grip on the players and they will probably be able to not be taking advantage of as much as they have been in the past.

In Carlow you’re in a great proximity to watch live football and not having to travel very far so if you haven’t already, go and give it a go and I think you might be pleasantly surprised at the standard. You also might just see one of the next Irish senior international players playing live. The European games are coming up soon and that will always bee a great chance for Irish sides to show how good they can be and hopefully this year will be another year where a League of Ireland side can make another breakthrough in Europe and highlight the league for all the positive reasons.

The Pádraig Amond column will be taking a break for the next few weeks but will be back again every Tuesday in The Nationalist at the end of the month.