CARLOW go into the first round of the  LGFA All-Ireland Junior Championship this weekend at the neutral Louth venue of Lannleire against a side who have given them grief in the past. Two years ago, Fermanagh edged out the Barrowsiders on a 3-9 to 2-10 scoreline. New captain, Ruth Bermingham wasn’t playing with the county that day and after coming into the squad last year, she was promoted to captain for the 2022 season. It wasn’t something she saw coming. 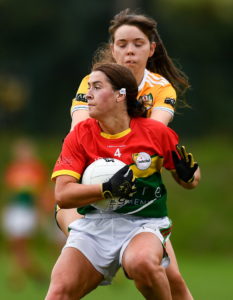 “I was taken by surprise. A big surprise but I feel very honoured to be asked,” the Bennekerry-Tinryland player conceded.

She says she would lead by example on the field but,  off  and on the pitch,  she wants to build relationships with the players

“I would be hard on myself. I would always try to be the best I can possibly be. That is my mindset. If I do something, I would like to give it 100%. That was the thought process last year and it is the same this year. I want to be the fittest I can be for myself and the team.

I suppose I lead by example but the most important thing for me is to build a good relationship with all the players. I wanted to feel they could come to me. That was a huge thing. That was the first thing which came to mind when Ed Burke, our manager, approached me,” she explained.

“I did have a good relationship already as a player but it was something I felt was hugely important.”

Carlow played in the Leinster intermediate championship this season. There were defeats to Longford, Wexford and Kildare. They played some great football and while defeat was their lot, spirits remained high.  It was a step-up for all the players and once they got their minds around it, they embraced the challenge.

“It was thoroughly enjoyable. When Ed told us we were playing in the intermediate championship I suppose we felt maybe a sense of fear but he had us well-prepared for it. It was something he wanted us to go out and enjoy. We weren’t training for no reason. We were putting ourselves up against these teams. All three games were enjoyable (Longford, Wexford and Kildare) and we brought something away from all the games. It was the best thing we could have done this season,” says Ruth.

Now they are playing in the competition where they will have to judge themselves and be judged on.

“We are going out to play Fermanagh this weekend and having played those games we couldn’t be more mentally or physically prepared. We are really looking forward to it now. In their second game, they travel to Derry. Carlow do not have the finances other counties have but the players are being catered for.

“The county board have been absolutely unbelievable. They have looked after us and given us everything we have asked for. We play Derry and go up the night before.”

Carlow to start Leinster campaign at home to Longford