DARRAGH Foley was unequivocal when talking about Carlow’s draw for Sunday’s Tailteann Cup quarter-final, it didn’t matter who Carlow were paired with but he is delighted to be playing in front of his county’s supporters once again.

Last Sunday’s victory over Tipperary was one of those special sporting occasions when the players on the field and the supporters in the stands and terraces come together as one to deliver a brilliant result. Yes, it was the players on the field who kicked the scores and made the defensive blocks but Foley was quick to acknowledge that the support the team received played its part as well. 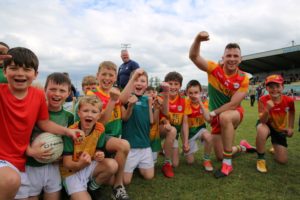 Carlow team captain Darragh Foley said the support the team received at the weekend made a difference and he wants more of the same again when Westmeath visit next weekend
Photo: Pat Ahern

“It didn’t matter who we got. There are only three teams we could have got so it is great to get the home draw,” said the Carlow captain.

“There was a great crowd in there on Sunday and that really helped. People may think it doesn’t count but it does. When the game is in the melting pot and everyone is going mad, you get energy off it,” explained Foley.

“It is the long weekend so it will be a great occasion,” he predicted.

In the first half,  Carlow could have found themselves seven points in arrears but then again they had their chances too and could have won by a bigger margin at the end.

He didn’t look back on Westmeath beating Laois away from home at the weekend. He says he will be looking at the video during the week.

“I will be watching back on those games.

“Westmeath are a seasoned team. They are a very strong outfit and it will be a tough game for us. The confidence our younger lads in particular will be huge and they will all be looking forward to it now.”

An initiative from Carlow GAA to attract young supporters to last week’s game worked superbly well and it will be the same this Sunday. Indeed, not only will Under 16s get into Netwatch Cullen Park for free on Sunday, and there will be the same raffles with the chance to win the brand new Carlow GAA jersey, but the youngsters are being invited to bring a ball of their own and get out on the pitch at half-time for a kickaround with their friends.

Bring a Ball and come on the pitch at half time to play and have fun with your friends. pic.twitter.com/DhRaYPpC3r

It promises to be another great occasion at Netwatch Cullen Park and everybody involved with Carlow GAA is encouraging supporters from all over the county to help the team get the result they want.