FORMER St Mullins player, Peter Fortune, was on the Louth team that won the Lory Meagher Cup in Croke Park recently. The smallest county in Ireland beat Longford in the final. Getting to the decider was done the hard way. The Midlanders had been narrow winners over Louth in the group stages of the competition while the Wee County had to battle to a 2-18 to 2-16 away win over Leitrim to qualify on points difference for their Croke Park destiny. When they got there, they beat Longford by a thirteen point margin  (3-27 to 3-14) to lift the cup for the third time.

Since the introduction of the competition in 2009, Louth, with three wins, lead the Order of Merit from Tyrone, Warwickshire, Fermanagh and Longford with two wins each. Donegal, Sligo and Leitrim have all won the competition. 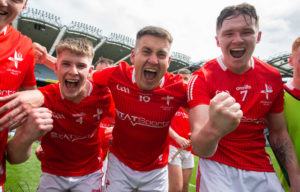 Yet Peter Fortune’s experiences in the smallest county in Ireland prove this is definitely not the case.

“100%. We would have been labelled with that in Carlow. I remember going to the Kilkenny league and we would be beating a team. The next minute someone would shout in from the line. ‘Come on, lads. They are only from Carlow.’

“It happens no matter where you when you are not in the top ten counties in Ireland. I know lads up here who would more than be able to hold their own in Carlow and other counties. They are as passionate about their hurling as anyone I have met down below. It has been a real factor for me to meet people like that,” the former St Mullins man says.

Peter remembers one of the reasons in how he became interested in hurling.

“I remember James Jordan collecting me and his son, Seamus. I didn’t even know where we were going and we went to Bahana. That was our childhood after that. We all fell in love with the game. The friends we made. St Mullins was my life from then.”

He enjoyed underage success with the club.

“I have a minor A and an under 21A. We were only the second team to win a minor title in St Mullins. We were fortunate to have a great group of lads coming together. You are talking about Mouse (Marty Kavanagh), James Doyle, Paul Doyle, Gary Bennett, Oisin Boland, Michael Walsh. Super hurlers in that group. If you look at today’s Carlow team, there is a good group of those lads that I played with who went on to play at senior level.

Fortune accumulated four  senior medals with St Mullins and  captained St Fechin’s to a senior title in Louth this year. He is living in Grangebellew and is teaching in Clogherhead.

“A lovely spot if you are ever up in these parts,” he remarks.

Playing with Louth in Croke Park was a dream come through this year. Even though he was on the panel, he missed out on Louth’s win in 2020.

“I played as a young lad in under 14 and 15 blitzes. This year was the first time that I played where we qualified for a final. I was on the panel in 2020 with Louth but it was the year I moved up. I had just joined the panel. With Covid regulations, only a certain number were allowed to tog out. I missed out on that day so it was important to put that right.

“On the day, I carried hurls. There was no-one in Croke Park for that final. This year, it was a big change and the crowd and the roar was so different.”

The Carlow exile has to pinch himself sometimes to make sure he hadn’t dreamt of playing in Croke Park. He is indeed awake. He has emulated a number of his former St Mullins friends and colleagues.

“In later years,  going to see James Doyle scoring four goals in Croke Park. Great days but getting your own moment and to say you were out there was brilliant. To have family, friends, girl-friend in the stands was brilliant.”

He says many Carlow GAA people were fully aware of what he achieved with Louth this year.

The one good thing about Carlow, you might not always get big days out in Croke Park but when you do, no matter where you are in the world, you get great support from Carlow. The people of Carlow are great and you saw that at the weekend, when the Carlow footballers beat Tipperary. Everyone was revelling in that success. I was very appreciative of all the messages I received in the lead-up to the game.”

The Croke Park experience of this year was completely different from the empty ground of two years ago.

“That time there was nobody there. It was so eerie. I would have been at All-Ireland quarter and semi-finals and you would be talking about 40-50,000 there. To see Croke Park empty was a strange feeling.”

The former St Mullins hurler and now a Louth intercounty hurler says it has been a privilege to have been on a side who won a cup in the GAA Field of Dreams.

“Being one of the older members of the panel, I was saying to some of the younger lads that at 21, 22, 23 you should appreciate not only being a select group of people who have played in Croke Park but you are a part of a select group of people who can say they lifted a trophy in Croke Park. That was my feeling over the weekend to be so grateful that we did it as a squad.”

And can Louth make an impact in the Nickey Rackard Cup?

“We were in Division 3A in the league. We stayed up by the skin of our teeth. We were unlucky in a way. We were close to Armagh. We could probably have beaten them. We were close to Tyrone and were beating them at half-time. They won the Nickey Rackard this year.

It will require a lot of work. The work we put in this year was testament to where we ended up. I would not be fearful of anyone in the competition and hopefully we can give a good account of ourselves next year.”