TULLOW Rugby Club could become the rugby capital of the South-East. So predicted the President of the Irish Rugby Football Union, Des Kavanagh and Tullow, Leinster and Irish player, Sean O’Brien. They were speaking at the official opening of the new 3G pitch at Tullow’s home ground of Blackgates on Saturday.

“I believe the facility we have and what we are going to grow here is going to be mega for the generation coming through  for both girls and boys. That is what I foresee here,” said O’Brien who went all the way to the top when he was picked for the Lion’s Tours of 2013 (Australia) and New Zealand (2017). 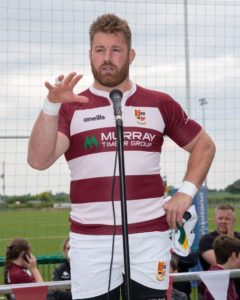 A huge crowd attended the launch and rugby supporters were treated to an exhibition match on the new pitch with a Sean O’Brien selection pitting their wits against a Tullow team who, at one time or another,  had been selected on  Leinster rugby teams. Local man, Fergus Tooher, refereed the contest.

It was very much a gala occasion and the crowd had a chance to look at their hero, Sean O’Brien, up close.

“I just think if you look around the club from the time I was around here as a mini to where it is now, it is a testament to the people who are here, past-players and everyone. The amount of work which has gone into getting the club to where it is today is phenomenal. Anyone who has done any work at all, I want to thank them. We will have more and more people getting into the ranks of Leinster and Ireland in the coming years. We want this facility here so that it gives us every chance of making that happen,” urged O’Brien.

“The work that has gone into the last week in particular is only phenomenal. The place looks super. Thanks for all your support in my career as well. It has been absolutely phenomenal for the locality and really means a lot to me. Thanks very much.”

“I am delighted and honoured in my year as President of the IRFU to be associated with the official opening of these facilities. I have witnessed the evolution, indeed revolution, of this club over the last 25 years. It has been magnificent. 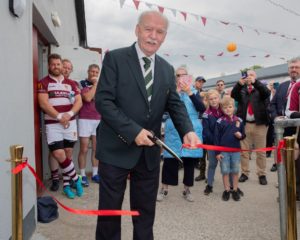 “I think Sean O’Brien has been intrinsic to everything that happened in the club over the years. It is also the case that you have had some wonderful committee members, club activities and volunteers. All the people who have worked very hard to bring the club to where it is. It is a wonderful achievement,” praised Kavanagh who himself was President of County Carlow FC before he went on to bigger and greater things.

Pat Byrne was Treasurer of the club for the last three years and is now President.

“You can see the facility here that we are very proud to officially open. It is setting a bench mark for rugby clubs in Ireland and we have a state of the art pitch here. It is a super facility. We look at this as a huge asset in years to come in terms of attracting new players,” he predicted. 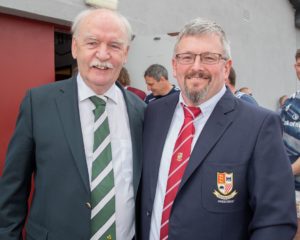 Outgoing club President, Paddy Browne, and Master of Ceremonies thanked the local politicians for the help and advise they had given the club during the development. He praised the Leader Programme which had helped finance the project.

Browne said he was loathe  to mention individuals but he did refer to one person and contributors.

“Noel Nolan made it all possible. We are also blessed to have a group of sponsors who support us year in, year out. Our donors. The club has been left in a relatively healthy position. It is a fantastic position to be in and a huge credit to our supporters. The organising committee. The club spirit. It was always there and the last couple of years has enshrined the project. Long may it last,” said Browne. 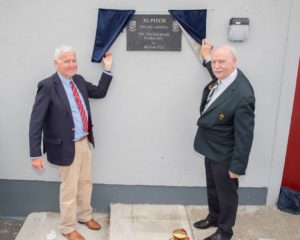 Probably the words of Des Kavanagh summed up the Tullow project best of all.

“You can stand proud among all Irish clubs. You have set a standard for rugby clubs across the country. Everywhere I go now, I talk about Tullow’s achievement.

There is now a facility in Tullow and in the South-East which the IRFU may be able to use in future for big games,” he predicted.