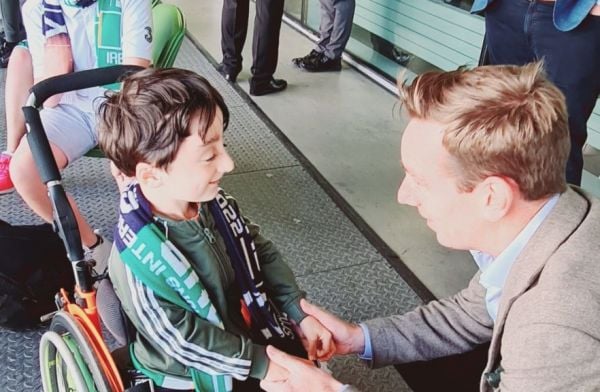 Adam King Adventures, which is run by Adam’s father David, shared a picture of the moment.

The caption read: “Look who we met at the @AVIVAStadium @FAIreland game! And after 2 years and all the lockdowns – finally – a real hug. What a lovely moment.”

Look who we met at the @AVIVAStadium @FAIreland game!

What a lovely moment 🇮🇪🎉💙 pic.twitter.com/gCRy9ciIil

Tubridy also shared a picture of the moment on Instagram, the presenter wrote: “As Adam’s Dad said, this hug was over two years, five Late Late Show appearances and a great friendship in the making.

King, who is seven, became an instant Toy Show favourite when he appeared as a toy tester on The Late Late Toy Show in 2020.

As the country was still in the midst of Covid-19 restrictions, he lifted a picture of a heart captioned: ‘A Hug fo you.’

Since his appearance on The Late Late Toy Show, King has raised over €250,000 for Temple Street Hospital in Dublin and Cork University Maternity Hospital.