Irish Government needs to ‘get real’ about protocol problems – Donaldson 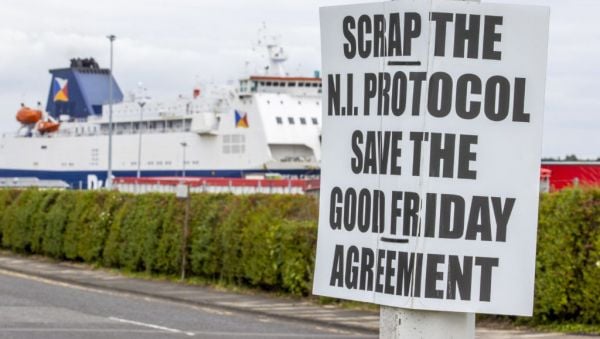 The Irish Government needs to “get real” about the problems being caused by the Northern Ireland Protocol, DUP leader Sir Jeffrey Donaldson has said.

Simon Coveney has been fiercely critical of the UK government’s plans to override parts of the international deal which was struck over Northern Ireland’s post-Brexit trading arrangements.

Mr Coveney warned the move could “destabilise” the situation in Northern Ireland and was undermining the work that led to the Brexit agreement with the EU.

But Mr Donaldson responded: “Simon Coveney fails to recognise the extent of the problems that the protocol is causing for Northern Ireland.”

“It is about stability. Not a single unionist MLA elected to the Assembly last month supports the protocol and without that cross-community consensus the political institutions cannot operate.

“I think the Irish Government need to get real, they need to understand the extent of the problem here and stop deluding themselves that it is some kind of minor issue.

“As for negotiations, Simon Coveney talks about sitting around the table – the problem is we’ve had two years of negotiation and no progress.”

Unionists in Northern Ireland are vociferously opposed to the international treaty, claiming it has undermined the region’s place within the United Kingdom.

The DUP has blocked the formation of a new power-sharing government at Stormont following last month’s Assembly election in protest.

Mr Donaldson said the UK government was entitled to take unilateral action over the arrangements.

He said: “What we need is a permanent solution here, and that is why I think it is important that the Government is bringing forward this legislation, and I think what the Government has proposed is balanced, it is fair.

“It enables us to see Northern Ireland’s place within the UK’s internal market restored in line with the commitment the Government gave in New Decade, New Approach over two-and-a-half years ago now.”

But Sinn Féin’s Stormont leader Michelle O’Neill said the UK government’s actions were a “straight up, slam dunk breach of an international agreement”.

She told RTÉ: “It undermines the Good Friday Agreement, and their actions will have huge economic consequences because the reality is, and everybody bar the DUP and bar Boris Johnson knows, that the protocol is working.

“It’s given us an economic advantage. Our economy is outperforming that of Britain and that’s I think what they want to hide in this.

Ms O’Neill added: “From the very outset of the Brexit debate, we said that the Good Friday Agreement and Brexit were incompatible.

“We didn’t consent to Brexit, but it’s still being foisted upon us.

“We sought to find some mitigation in the form of the protocol.

“It protects the all-island economy which is flourishing as a direct result of the protocol.”