THE Junior Hurling Championship is already underway after St Mullins and Burren Rangers made winning starts last and there are some intriguing games set for decision this weekend. 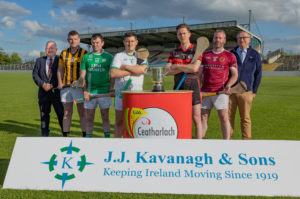 Any changes to playing squad for 2022: A little bit of change, a few young lads coming up from minor, we kept most of the lads from last year, a few injuries unfortunately that are going to miss the season unfortunately

Manager Name: Jarlath Bolger is managing us this season, he would have played with us for the last 6-7 years so he’s taking over the team this year for a change

2022 so far? It’s been good so far, we had a decent run in the Bolger Shield and had a fair few challenge games so it’s been good, things are going well.

Hopes for the championship? We’ll be hoping to be competitive in it, we were beaten in the semi-final last year by Bagenalstown so hopefully we can get that far again and push on a bit.

Any changes to playing squad for 2022: We’ve lost a good few lads up to the Intermediates but we have gained 4-5 lads out of minor who are very good.

Manager name: Managed by Thomas Lawlor and Paudie O’Toole, they’ve been there three or four years so they have a good knowledge of things and know a lot of the young lads coming up so we’re well set up with the two boys.

2022 so far? It’s been good, we played the Bolger Shield, the league part of it and we got to the final of that against St. Mullins and we were lucky enough to beat them here in a good match, it was great to get games and it was easier to train for it.

Hopes for the championship? We’ll look to get to a semi-final anyway and see after that. We got to a semi-final last year against Pal and the year before against Ballinkillen and we were close enough in both of them so we’ll be hopeful of reaching at least a semi-final this year.

Who do you see as championship favourites? It has to be Burren Rangers, they beat us by a couple of points, they’re very physical, lots of good hurlers. It would be great for the county if they did get up to the Intermediates, they should be the favourites and it would be great to have another club in the Intermediate and hopefully they can move on to senior eventually and then if Carlow Town can get up there we’ll have eight senior hurling clubs in the county which would be amazing!

Any changes to playing squad for 2022? A few changes, a few young lads coming in so hopefully they can make an impact. We’re not losing too many from other years either.

Manager name: Enda Kavanagh is back with us this year. He’s been with us the last number of years and he’s over the Junior footballers too.

2022 so far? We didn’t field a team in the Bolger Shield at all like most of the other teams here so it’s hard to know but it all depends on trying to get the numbers back. Hopefully we’ll kick on from there.

Who do you see as championship favourites? Ballon have been knocking at the door for the last few years so maybe them but you never know.

Any changes to the playing squad for 2022: It’s pretty much the same, few new lads around but numbers are always an issue.

Hopes for the championship? We’ll be hoping for a semi-final anyway but we’ll take it one step at a time and see how it goes.

Who do you see as Championship favourites? It’s pretty much anyone’s game but Rangers are strong so you’d expect them to be fairly strong. Myshall are always strong too.

Manager: Paud O’Dwyer: We have lost a number of players to the States for the summer. We  have about four players injured. Just to get out was an achievement on Saturday night against Burren Rangers. Hopefully, we will get 2-3 of those lads back from injury over the next two weeks. It will be a struggle for us but we are looking forward to it.

Players to watch out for? Sean Dermody and Shane O’Neill bring a bit of youth to the team while Cathal Ryan, Liam Kenny, Gavin Farrell and David Reid have a mixture of skill and experience in the squad.

Manager: Stephen Bambrick: We are playing Palatine on Sunday next but didn’t play last week. The senior selection will dictate what is available to us at junior. It is a tight enough squad as it is for the seniors and that will work its way down to the juniors.

Players to watch out for: Enda Dunne, Graham Amond, Caoimhin Ryan, Jack Bermingham, Ben McDonald and Mark Fitzgerald will be available and should back-bone the team.

Captain: To be selected

Players to watch out for: David O’Brien is Club Secretary. He says it is too early to predict who will be on the intermediate team this year.

We won the junior championship last year but the gap between junior and senior is big. We want to bridge that gap and be competitive at intermediate level. If we do that  it would be a great support for both teams.

It is too early to say who is definitely going to play on either team. The players are very ambitious and want to play senior hurling.  The intermediate level is a good platform for players to break into the senior squad.