IT’S difficult to pick out a standout team in the JJ Kavanagh & Sons Intermediate Championship and when the ball is thrown in for the first time at the weekend there are a number of teams who will genuinely believe they can challenge for silverware. HARRY SHORTHOSE spoke to representatives from the teams. 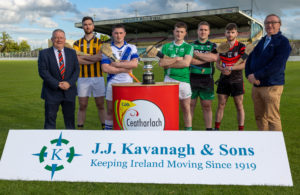 Any changes to playing squad in 2022? We’ve a few lads coming up from minor from last year that will be joining the squad. There’s also been a few positional changes.

Name of Club Manager: Sean McMahon, he was with us the last couple of years

Hopes for the championship: To give it a good go, hopefully win our division, compete at a good high intensity. Not the best season last season but these things happen, we’ll build from there. Not much we can do about last season, just focus on this season.

Who do you see as championship favourites? I think there’s a few good contenders. In Division 1 it could be St. Mullins or MLR, for us I couldn’t really tell you, it’ll all be on the day. If we put it up to them, I think we could have a good chance with it.

Any changes to playing squad in 2022? Few new young lads coming up are a big help, fresh legs.

Name of Club Manager: Pat Mosey and Pat Doyle are over us this year and James Doyle is stepping in too. They’re boys who have been around the club for a long time now and been involved all the way up.

2022 so far? Training is going well, we’re all training with the seniors at the moment, plenty of young lads coming up too.

Hopes for the championship: Everyone’s aim is the final, see how it goes, numbers are an issue at the moment. We’re losing lads to seniors. The last few years we’ve had to pull out because of a lack of numbers so hopefully this year we have a team for the whole championship.

Who do you see as championship favourites? It’s hard to tell. We played Rangers there recently and they’re a fairly strong team, Myshall are always going to be up on top there too so it’s hard to know. If we can keep the numbers we have as good a chance as anyone.

Any changes to playing squad in 2022: There’s been a few changes, a few lads have gone away and then obviously being the middle team of three we’ve a lot of lads who want to use it as a platform to get up to senior and a few lads used it well last year so we’ve a different team altogether this year.

Name of Club Manager: Andrew Redmond is down as manager for this year. He’s a good club man, he’s been involved with a lot of teams through the years, he’s taking some time out from playing this year. He’s been on the intermediate panel before, he’s been on the junior panel before so he’s a good man to have around the parish. That’s the good thing about a parish, you’ve a lot of people willing to give back to the team.

Hopes for the championship: Every championship the hope is to win it, if not the minimum is to get to the final and to be competitive in every game. Usually we pull things together so hopefully that’s the same this year. It does play into it a little bit [being beaten finalists last season] because we know we lost that one and left it behind us so hopefully we can emulate things again and get back to the final and make up for it like we did a few years ago when we won our first title, we had been beaten the year before.

2022 so far? It’s been great to get some normality back, the last two years have been difficult for everyone.

Who do you see as championship favourites? Obviously, you have the big teams, I don’t want to say who but hopefully we’ll be regarded as one of them. The thing with Intermediate it’s anybody’s game because there’s a few second teams in there so it depends on what way they can balance their panel

Any changes to playing squad for 2022: We’ve tried to keep the same panel pretty much

Hopes for the championship: It’s our first year up so it’s gonna be tough but we’re gonna hope to try and compete as best we can and see how far we can go. If we win one or two games, you get momentum and you’re into a semi-final and see where it goes from there.

Who do you see as championship favourites? Myshall, probably Rangers again too, they’re strong but hopefully we’ll be able to put it up to both of them.

Any changes to playing squad for 2022: A lot more young lads coming up from Minor from last year so we’ve a really strong squad with plenty of experience

Manager name: Edward Coady, the retired senior player, he was a great player and he’s a great coach too. He was over last year’s team too.

2022 so far? Training has been very very good, we’ve had a few challenge games and done well

Hopes for the championship: Win it, we have a very good chance, we’ve a very strong team

Who do you see as championship favourites? Gotta back ourselves