A Callum Brennan goal late in the second half of extra time was enough to secure a 2-1 win for the Carlow & District Juvenile League against Limerick County at the Kennedy Cup in University Limerick.

It is the first time that the league have brought back silverware from the prestigious competition and their ninth placed finish, along with the fourth place in 2019, means Carlow will be among the first seeds for the 2023 tournament. 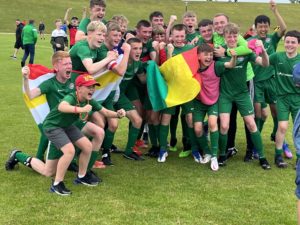 The Carlow team celebrate their success at the Kennedy Cup

It was done in difficult circumstances too. Seamus Lynch’s 27th minute goal gave Carlow the lead for the majority of the game but Limerick County struck for an equaliser with the last kick of the game, in the 10th minute of injury time. Quite where such a lengthy spell of added on time came from in a half that was only supposed to last 30 minutes wasn’t clear but it says much about this Carlow team that they didn’t feel sorry for themselves when the game went into extra time and instead, got the win they deserved.

Carlow were the better side through the first half. Sean Hayden brought a good save from the Limerick goalkeeper with a powerful shot from the edge of the box after being set up by Brennan in the 11th minute.

Hayden was then involved with a cleverly worked short corner routine with Lynch. From the resulting cross, the ball fell to Zak Hernan and the Carlow skipper’s shot was only inches over the crossbar.

Carlow took the lead just before the half time break when Ben Curry aimed a throw in from just inside the Limerick half towards Lynch. The powerful Carlow forward cleverly turned his man and once inside the penalty area found a shot that went through the ‘keeper’s legs.

It was a different game in the second half as Limerick County, spurred on by an enthusiastic home crowd, pushed for an equalising goal. But although Carlow had a lot of defending to do, they did it relatively comfortably and were very organised in doing so. Goalkeeper Luke Dooley confidently dealt with anything that evaded his defence.

They did have a major let off as the game moved into injury time though when a Limerick shot from the edge of the box crashed off their upright and bounced away to safety.

Into injury time, Carlow would have been forgiven for thinking that they almost had the job almost done but few would have imagined that the teams would still be playing nearly 10 minutes later. In the final action of game, Limerick swung in a free kick from the just inside their own half towards the Carlow penalty area and for once the Carlow defenders weren’t able to clear and Limerick pounced to score, sparking a mass pitch invasion from jubilant fans, to send the game to extra time.

Limerick were reduced to ten men early in the extra time period when their striker was shown a second yellow card for deliberately handling the ball into the Carlow net.

Despite their extra man, Carlow couldn’t make through until there was barely two minutes left the game. Edward O’Byrne’s forward pass looked to be covered by the Limerick defence but their centre half’s clearance ricocheted off a team mate and fell perfectly for Brennan instead the area. His perseverance in chasing down what looked like a lost ball was rewarded with a match-winning opportunity and the forward who had been in great scoring form all week made no mistake in firing home.

It was a great way to round off such a wonderful week for this young group of players and the final whistle was rightfully greeted with great scenes of celebrations between the players and their supporters.