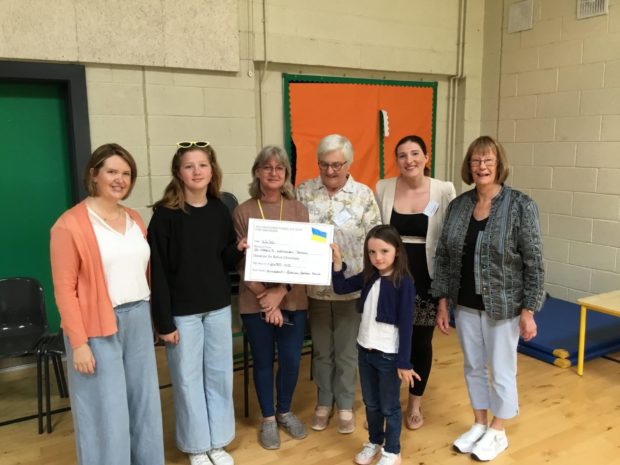 A GREAT school and community effort in Bagenalstown saw a fantastic sum of over €2,500 raised for Ukrainian refugees in Carlow.

St Mary’s NS held a bake sale and a sponsored ‘Run to Ukraine’ on 27 May. The event was organised by the student council, where they designed posters advertising the bake sale and also wrote a letter to parents explaining the event. The students and teacher/principal Kathy McGeeney calculated the distance from Carlow to Kiev and measured the school’s football pitch, working out how many laps all 102 students would need to run/walk to simulate running to Ukraine as a collective.

Parents were invited to run with their child and then enjoy some goodies at the bake sale in the PE hall. There was a great sense of excitement and lots of hustle and bustle that had been silent in the corridors since school closures began in 2020.

Students from fifth and sixth class organised the layout of the bake sale, ensuring there were ample paper bags to package the tasty goods for their customers, and rubber gloves were worn when handling the produce.

The bake sale saw a huge response from the whole community, where delicious and creative home-baked goods were on display. The community of St Mary’s in Bagenalstown has many talented bakers, who would rival any ***Great British bake off*** contestants!

Just over 100 children enrolled for the event and there was collective astonishment when it was announced that the money raised totalled €2,660. Ms McGeeney thanked all who sponsored the children in their run and for not only baking the huge amount of goods for the bake sale but their generosity in buying the delicious treats on offer.

On Friday 3 June, the school welcomed representatives of Ballon Refugee Centre, where a cheque for €2,660 was handed over. Suzanne Curtin from the centre said all of the money would be used to help families who arrive in Ballon awaiting to be housed.

She also said that Siopa Glas in Ballon would welcome men’s clothing, vouchers for shoe shops, vouchers for toy shops and female sanitary products for the refugees. There were many stories of how women and children desperately wished for a change of shoes when they finally reached Ireland, as they had walked for so long that their footwear needed to be replaced. Vouchers for shoe shops would be appreciated, which can be sent to Siopa Glas in Ballon. 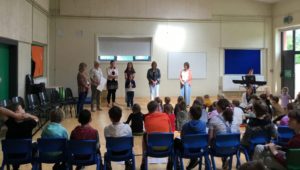 The presentation at St Mary’s NS