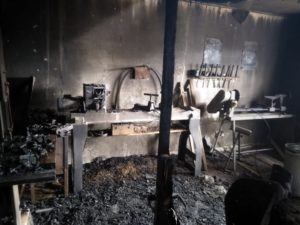 A BORRIS community group has been devastated after a fire gutted its premises last week.

Borris men’s shed is looking for a new home and is starting from scratch following a fire at the premises at the old Borris mart on the road to Fenagh in the early hours of Tuesday 14 June.

‘‘It’s burnt down, destroyed,” said group secretary Neill Hall. “With the canteen, the wall and roof collapsed. Over the workshop, the roof burned away. All the tools were destroyed.’’

It is believed that around €20,000 of equipment was destroyed. The cause of the fire may never be fully confirmed, but it’s thought a fridge in the canteen may have been the origin.

Neill described it as devastating for the group.

‘‘I was gutted,’’ said Neil. ‘‘When I went down there, the lads were standing around. There were tears in people’s eyes. All the effort we had put in. All the grants we were able to get to buy lathes and saws. Just gone, destroyed.’’

The group had been working on a refit of the DeJa Vu shop in Bagenalstown, but the completed units have all been destroyed.

An old mill sieve from Clasghanny mill that had been restored was also burnt.

The men’s shed is looking for any space to resume its activities, while equipment like lathes, hand tools, drill and impact drivers, compressors, nail guns would be welcome.

A GoFundme ‘Help Save Borris Men’s Shed’ has been set up, while some generous locals have already offered money,

The men’s shed has done a huge amount of work in the community over the last three years, while also providing an invaluable social outlet.

Neill said men will work shoulder-to-shoulder and have chats they wouldn’t have over a coffee or in a pub.

‘‘It’s all about men’s health, not just things that are made for the community. People can get out, men who live alone or whose wives want them out from under their feet. They can come down and it’s a social thing without alcohol.’’