PADRAIG Amond is starting the next chapter in his career this morning as he begins pre-season training at National League side Woking after signing a two year deal with the club yesterday. 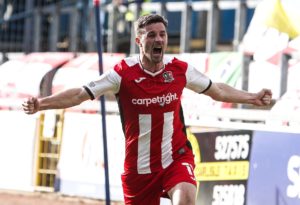 Amond has spent the last few seasons of his career battling for promotion at the top of League 2, he played in two Play-Off finals at Wembley for Newport County before finally achieving promotion while on loan at Exeter City last season, and he now returns to a league where he had his best ever goalscoring season.

In 2015/16, Amond scored 30 goals for Grimsby Town and helped them to promotion with after a Play-Off final win at Wembley. He would love another season like that.

“I’m obviously a lot more experienced now but if I could replicate something like that it would be unbelievable. I have a lot more to my game now than I did then, even on the experience side of things so hopefully I can pass on a few little tips and bits like that to the younger players in the squad. Hopefully it can be a good season, I think the sky is the limit for this squad with what the gaffer is after signing this summer,” said Amond.

Woking, who are based in Surrey near London, are Amond’s seventh English club after he moved to the country following his spell with Portuguese side Paços de Ferreira. They follow Accrington Stanley, Morecambe, Grimsby Town, Hartlepool Utd, Newport County and last season’s loan spell at Exeter. He always been a popular figure amongst supporters, and scored goals, wherever he has been and will be hoping his time at The Cardinals will be no different.

The Carlow man isn’t the only former Ireland Under 21 striker to sign for the club this summer. Reece Grego-Cox, who won 11 Irish under 21 caps, also signed for Woking last week. After a solid mid-table finish last season, Woking manager Darren Sarll is clearly trying to put pieces in place to move the team up the table and get closer to the promotion places and Amond will be a big part of that.

The fixtures for the 2022/23 National League season will be released on Wednesday 6 July.

Key an eye out for the Padraig Amond column every week in The Nationalist, it will be making its return very shortly.