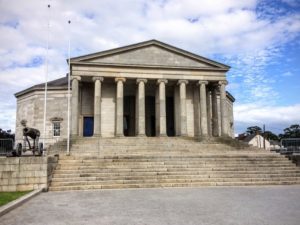 A SECOND man has been charged in connection with an alleged attempt at deception at a Carlow post office.

After the defendant was charged with attempted deception, Mr Coakley replied: “I tried to take no money at all.”

After he was charged with attempted theft, Mr Coakley replied: “I was asked to help. I took no money at all.”

Directions from the DPP were for trial on indictment in the circuit court.

Judge Geraldine Carthy was told gardaí had no objection to bail and no conditions were being sought. She adjourned the case for two weeks until 6 July for a book of evidence.

A co-accused, Declan Haughney (40) of Pollerton Road, Carlow, is to appear before the next sittings of Carlow Circuit Court in July.

Man who exposed himself to female garda appears before Carlow court