CARLOW head into a clash against London in Netwatch Cullen Park on Sunday knowing that they already have one foot in the TG4 All-Ireland Junior Championship semi-finals – but the job is not quite done yet. 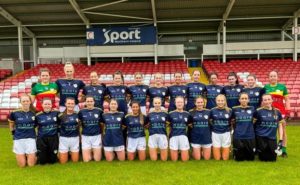 Ed Burke’s team have been superb in the Championship so far and have beaten Fermanagh and Derry to leave them top of Group A with a positive score difference of 22.

London enter the game in third place in the group and they would have to beat Carlow by over 18 points to the deny Burke’s team a place in the final four.

However, it won’t be negative thoughts like that dominating Carlow’s build up to this game. It is their first game on home turf in this competition they have a chance to make it three wins from three in the group stages which would put themselves into a strong position going into the semi-final.

A three-team Group B has already been decided. Should Carlow top Group A they will play Limerick in the All-Ireland semi-final and avoid a meeting with Group B winners Antrim, the team who beat Carlow in last year’s semi-final after extra time.

The team, who sponsored by Moore Environmental, are hoping for as big a crowd as possible to help really emphasis the home advantage.

The game throws in at 12.30pm. Tickets must be purchased beforehand as no cash will be taken at the turnstiles and they can be bought here. Under 12s are free admission, while Under 12s-Under 18s cost just €2.