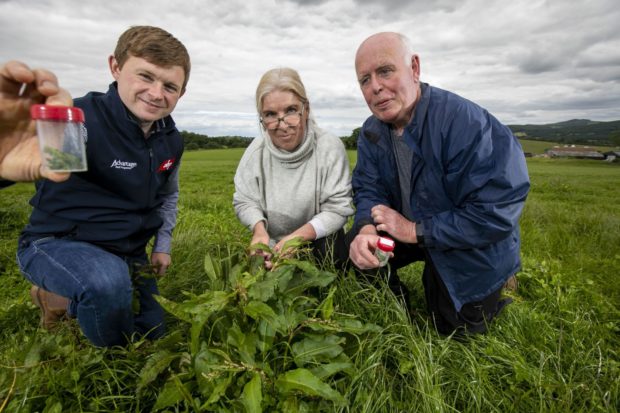 BATTALIONS of beetles eating their way through a field in Carlow show the way forward in eradicating a pesky weed.

ABP Food Group is using Irish beetles to tackle the war on dock leaves at its demonstration farm in Clonegal which is owned and operated by Michael and James Sheppard.

The beetles are bred by Mayo-based couple Louis and Siobhan Ward and the initiative is part of an ABP approach that is aimed at promoting on-farm environmentally sustainable and regenerative farming practices.

ABP’s demonstration farm at Clonegal is a centre of excellence when it comes to industry leading environmental research. Trials carried out at the farm have already shown the potential to significantly reduce the carbon footprint of beef production by reducing the age of slaughter through better genetics and better feed efficiency.

The Wards, who run their own farm stocked with pedigree Angus cattle, this year set up a special company, Green Submarine, to supply Irish farmers with their secret weapon in the war on docks –   Gastrophysa viridula – known as the green dock beetle.

Dock weeds can reduce yields from beef and dairy pastures and silage meadows by up to 40% in extreme cases said ABP Agri sustainability manager Stephen Connolly. He added that docks are a considerable problem for Irish farmers, forcing many farmers to utilise expensive specialised commercial weed killers to destroy docks. 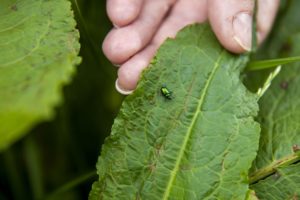 Beetles being used to curtail the growth of dock leaves Photo; Fennell Photography

“We are constantly looking for green sustainable solutions to farming problems and we think we have found a potential solution to the problem of dock weeds in Louis and Siobhan’s dock beetles. The beetles are a key part of incorporating regenerative agricultural practices on the ABP demo farm, providing a natural, simple, sustainable, nature-based solution to dock weeds, eliminating the headaches while at the same time potentially improving biodiversity on-farm through reduced herbicides applications,” he added.

Siobhan Ward, an agricultural consultant, explained: “We noticed something eating docks in one of our fields and some research showed it was dock beetles. We gradually introduced the beetles to the rest of the farm and we no longer need to spray for docks.”

Green Submarine now breeds beetles in polytunnels on an industrial scale, marketing them to farmers as a one-off, cost-effective, ever-lasting alternative to chemical herbicides Once deployed on a farm, the dock beetle breeds to colonise the whole field, returning every year to keep the docks at bay, related Louis, who holds an MSc.

Louis Ward said: “The population of dock beetle will initially rise to decimate the dock weed naturally, then fall back as its success diminishes its natural food supply in a sustainable way on an annual basis, all for a one-off outlay which is far cheaper than administering just one application of weed killer.

“Dock beetles are native and natural predators of docks. They skeletonise dock leaves and keep them at an acceptable level in grassland. Crucially, the beetle hibernates for the winter and reappears each spring, giving very low long-term cost.”

ABP’s Stephen Connolly said nutrient and protein-rich white clover thrives in dock-free pastures and reduces bovine methane emissions, but noted that, unfortunately, the clover is killed off by many commercial sprays.

“The less commercial fertiliser used, the more work clover does, helping the ecosystem, fitting into our regenerative farming practices on the ABP demo farm” he said.