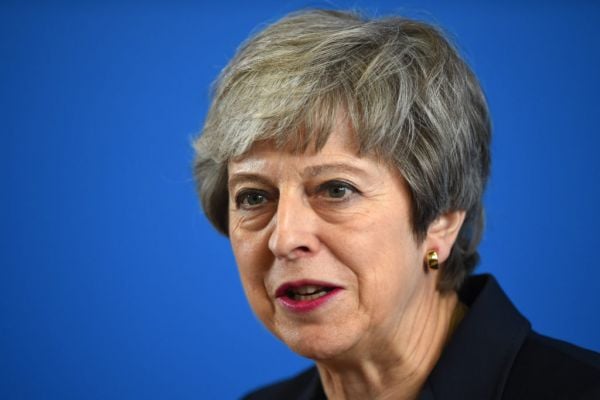 Former UK prime minister Theresa May has warned moves to scrap unilaterally parts of Northern Ireland’s Brexit deal are “not legal” and will “diminish” the UK’s global standing.

The Conservative former prime minister delivered a withering assessment of the Northern Ireland Protocol Bill as she made clear she would not support it.

Mrs May questioned the argument that a legal principle of necessity allows for the UK government’s plans, insisting there is “nothing urgent” about the legislation.

Concluding her speech to the House of Commons, she said: “The UK’s standing in the world, our ability to convene and encourage others in the defence of our shared values, depends on the respect others have for us as a country, a country that keeps its word, and displays those shared values in its actions.

“As a patriot, I would not want to do anything that would diminish this country in the eyes of the world.

“I have to say to the government, this Bill is not, in my view, legal in international law, it will not achieve its aims, and it will diminish the standing of the United Kingdom in the eyes of the world, and I cannot support it.”

Foreign secretary Liz Truss had earlier attempted to downplay concerns of MPs by arguing the Bill has a “strong legal justification” and the UK remains committed to seeking a negotiated solution.

The UK government has argued the measures to remove checks on goods and animal and plant products travelling from Great Britain to Northern Ireland are necessary to safeguard the Good Friday Agreement and peace and stability.

The imposition of checks between Great Britain and Northern Ireland in order to keep an open border with Ireland has angered unionists.

But capitals across the EU bloc reacted with outrage to the plans to override parts of the protocol, amid concerns it breaches international law.

Ms May said she did not believe the Bill would achieve the aim of restoring powersharing institutions at Stormont and warned it would give UK ministers “extraordinarily sweeping powers”.

Speaking during the Bill’s second reading, she said: “I actually started off by asking myself three questions: First of all, do I consider this to be legal under international law? Second, will it achieve its aims?

“Third, does it at least maintain the standing of the UK in the eyes of the world? My answer to all three of those questions is ‘no’.

“That is even before we look at the extraordinarily sweeping powers that this Bill would give to ministers.”

Ms May also expressed doubt that the Bill will bring the EU back to the negotiating table.

Recalling her own experiences with the EU, she said: “As I discovered after I had faced a no confidence vote, despite having won … they then start to ask themselves, well is it really worth negotiating with these people in government because will they actually be there in any period of time, regardless of justification or not for them taking that view.

“But also, actually, I suspect they are saying to themselves, why should they negotiate in detail with a Government that shows itself willing to sign an agreement, claim it is a victory and then try to tear part of it up in less than three years.”

On the legal principle of necessity for the Bill, the Conservative MP said: “Necessity suggests urgent. Imminent peril is the phrase that is used. There is nothing urgent about this Bill.

“It has not been introduced as emergency legislation. It’s likely to take not weeks but months to get through parliament.”

He also voiced concerns that the UK could “trash” its international reputation by approving the legislation designed to deal with issues connected to trade between Great Britain and Northern Ireland.

Ms Truss, opening the second reading debate on the Bill, said the UK continues to raise issues of concern with the EU.

She told the Commons: “We simply cannot allow this situation to drift. Northern Ireland has been without a devolved government since February due specifically to the protocol, at a time of major global economic challenges.

“Therefore, it is the duty of this Government to act now to enable a plan for restored local government to begin. It’s both legal and necessary.”

“That is why there’s strong legal justification, as set out in our legal statement, for us taking this action because our priority as the United Kingdom government has to be political stability within our own country.

“And while we put this Bill through parliament, we will continue to seek a negotiated solution with the EU – and in fact there are provisions of the Bill to deliver it.”