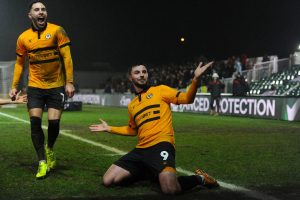 AFTER a six week break it was back to work this week for me and I had some new surroundings to try and get used to also. I have signed for a new club Woking Football Club in the National League, and I am really looking forward to my time there. I have signed a two-year contract which I am really pleased with, and it gives me some security also knowing that next summer I won’t have to be worrying about being out of contract.

Being an out of contract player is always a stressful time. It was the first time since 2016 that I have been out of contract and even then, I was probably the least stressed out of contract player there was as I was coming off the back of a 37-goal season, so I had plenty of options. The previous season before though when I joined Grimsby it wasn’t the case. I had agreed a deal with a club and thought everything was sorted when it fell through the day I was to sign for that club which was three days before the start of preseason, and it was panic stations for me. I had actually turned Grimsby down a few days previously and it was lucky the assistant manager called me to try and persuade me to change my mind and to sign for them. And his persuasion tactics worked – well at least that’s what he thought! And I was the most relieved player in the world, and then it turned out to be the greatest bit of luck to happen me in my football career.

I have a lot of ex-teammates who haven’t had the luxury that I have had this summer and it is becoming tougher and tougher as players get older for them to command the contracts they deserve because of how many younger players are available for cheaper options coming out of bigger academies and clubs decided to take a chance on them instead.

Luckily for me I had quite a bit of interest in me from the day it was made public that I was leaving Newport County. Because of the interest in me it allowed me to have a real good think about my future and where it was going to lie so I didn’t have to rush into anything. There were a number of Football League clubs who wanted to sign me and who offered contracts to me and also another club who wanted me as a player coach too which was a nice surprise but ultimately, I decided to sign for Woking FC.

There were a lot of surprised people when they found out that I had dropped a division especially after just being promoted to League One, but to me everything just aligned perfectly for myself and my family and this is the right decision. The manager has tried to sign me on multiple occasions, so he knows what I am about, and it shows he really rates me as a player and that is a big plus for me. He spoke to me about the ambitions of the club and how the new owners see the club growing and growing so it was something that I was very excited about and wanted to be apart of.

I was away on holidays with my wife Caoimhe, son Eóghan and my mother and father-in-law when myself and Caoimhe decided on where my next club was going to be. I actually signed while I was in Spain ten days before I was due to be home, but it was signed pending a medical which I done last Wednesday when I got back from Spain. Thankfully, all that was clear, and we started training the following day, so I didn’t have to wait long to meet my new teammates.

One of the key things in the deal as I mentioned before was the longevity of it. I am 34 now and this deal takes me until I am 36 and there aren’t many two-year deals floating about for 34-year-old players, so it shows the faith the club and belief the club has in me. I really believe that this can be a very exciting season for Woking supporters though. I haven’t signed to just go through the motions so I can’t wait for the season to start. Obviously, I have the small task of pre-season before the league games start but I have always been one of the weird ones who enjoys pre-season.

When the deal was announced I had a lot of really nice messages from people back home wishing me well. I had told my family and closest friends about signing while I was away in Spain and naturally, they were all delighted for me. They were joking about how on social media they now had to unfollow my last club and follow my new club which from reading on social media seems to be quite the norm for the people following my career from back in Carlow.

Wherever my next club was going to be it was always going to be a decent distance from Newport. Woking is about two hours from my home in Newport towards London without traffic so there is going to be a bit of travelling involved for me but there is another player from not far from me who plays there so we will be travelling together. I will stay down there a few times during the week which will be helpful, but it isn’t much more travelling that what I was doing last year at Exeter, so it doesn’t concern me. I commuted to Grimsby which was two hours from the house in Manchester and Exeter last year and I just happened to be promoted in both of those seasons so maybe it is a good omen for me.

Either way I’m very excited for the season ahead and I know the new Carlow branch of the Woking FC supporters club are equally as excited too.