THE Nine Stones at the heart of Mt. Leinster were awoken from their deep slumber on Saturday morning last as the sounds from the Clash of the Ash, the Caman and Sliothar travelled over hill and valley proclaiming the Leinster Poc Fada finals in Camogie and Hurling were under way.  It was a historic day for Cumann Luthchleas Gael Ceatharlach and Carlow Camogie as it was their first year to host all twelve counties of Leinster in Hurling and Camogie on the mountain. However Carlow GAA and Carlow Camogie has been hosting their own internal Poc Fada competitions ar Sliabh Bawn for a good number of years with great success and their organisation and know how in the running of Saturday’s event was exemplary.  It was announced three months previous that the Nine Stones Mt. Leinster would be the 2022 site for Poc Fada Laighean. 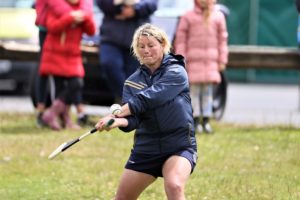 It was then that the local organising committee led by Chairperson of Mount Leinster Rangers, Eddie Byrne (vice-chairperson Carlow GAA), Secretary Gerard Lennon (St. Mullins), Co. Secretary Michael Whelan (Naomh Eoin), Chairperson Leinster Camogie Linda Kenny, PJ Fox, Naomh Eoin, Jim Bolger (Chairperson Carlow GAA) and Tommy Murphy (Naomh Eoin) with full support from Culm Carty (Leinster and National Poc Fada Committee Officer), swung in to action. The committee met at the Nine Stones the designated course was walked agreed upon and marked out.  Each member under took on different tasks and made arrangements behind the scenes to ensure the safe and fun filled running of the event down to the smallest detail. The call went out to all hurling and camogie clubs in the county and they responded magnificently with markers, stewards and people to work for the four events.

For all the competitors in Hurling and Camogie at Under16 and adult level this was a big day as they represented their county as they travelled with their parents and friends from the twelve counties in Leinster many coming to this beauty spot for the first time.

Culm Carty was first on the mountain at 8.30am with a van from Comhairle Laighean that served as a site office all day. The organising committee and competitors for the Under 16 events also began to arrive. Competitors registered along with their spotters and then they were introduced to the person that would mark their number of shots.

Gerard Lennon and Culm Carty gave a summary of the rules answered a few questions and at 11am the under 16 boys competition commenced. Competitors went in pairs. Then the Under 16 Camogie girls began on the trail. Braving the elements using all their experience keep on track and complete the course with the least number of shots possible was the name of the game and full marks to all competitors as they had to brave a severe gale force wind and the Seniors had to endure and contend with heavy rain and hailstones for a time, full marks to all they showed true grit and spirit. There was great excitement and anticipation from all counties as the first competitors began to come in across the hill on the final decent home. When their final shot crossed the finished line the distance from the line to where the sliothar stopped for each competitor was measured and recorded.  Markers handed in their marking sheets to the and after checking the competitors were placed in order where they came. If competitors were level with the same number of shots after taking their last shot then the tape measurements come in to play. 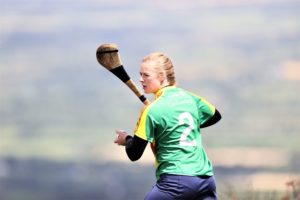 Sarah Sheehan from the Myshall club gets ready to take a shot high up the Leinster Poc Fada course at The Nine Stone, Mount Leinster
Photo: Pat Ahern

In the Senior Camogie event we had local success when Tracy McNally, Naomh Brid was crowned the Leinster Senior Poc Fada Champion for 2022. Tracy also won the Leinster title in 2018 with her sister Lyndsey (Condell) a former Carlow, Leinster and All Ireland Champion. The Condell Family are huge supporters of the Poc Fada competition over a long number of years. In the Senior Hurling event further success with County Senior Hurling and Naomh Eoin goal keeper Brian Tracey finished in second place. In the Under 16 events Fionn O’Brien, Mount Leinster finished in third place after a strong showing with Sarah Sheehan, Myshall unlucky not to finish in the top three. 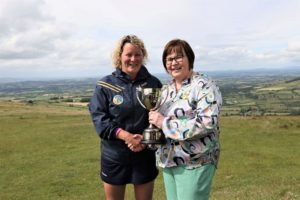 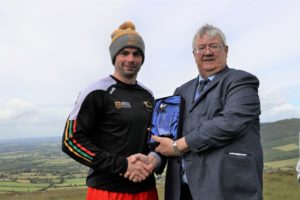 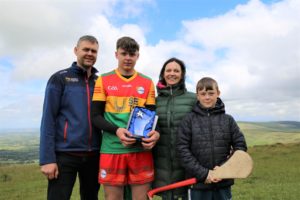 Fionn O’Brien from the Mount Leinster Rangers club with his family after he came second in the under 16 Leinster Poc Fada finals. Included in the photo are his family, John Ruairi and Fiona.
Photo: Pat Ahern

Killian Phelan from the Clara Club in Kilkenny was the winner of the senior competition and in a very close second place was Brian Tracey Naomh Eoin and Carlow goalie. Both players will try for honours as they go forward to the All-Ireland Poc Fada. They are taking part for the first time

Kilkenny who did so much in promoting Poc Fada Laighean down through the years.  He called on

Colm Finnegan Treasurer of Leinster Council GAA  deputising for chairperson Pat Teehan who was unable to attend to present the winners with their prizes. 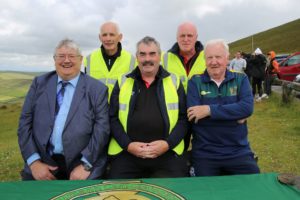 On behalf of Comhairle Laighean Eddie Byrne thanked all competitors markers and spotters and all stewards an a special appreciation to all the clubs who supplied stewards helpers and workers especially Burren Rngs Camogie Club, Myshall Camogie Club St. Mullins GAA club. He thanked Carlow Co. Council for the use of the wonderful facility, Carlow Gardai for their advice, the Order of Malta who were present all day and a big thank you to Naomh Eoin GAA and Myshall Community Centre who provided refreshments all day.

There were many hill walkers on the day who thoroughly the event. 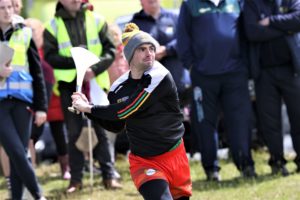 Brian Treacy gets his first shot away in the Leinster Poc Fada finas at The Nine Stones, Mount Leinster
Photo: Pat Ahern