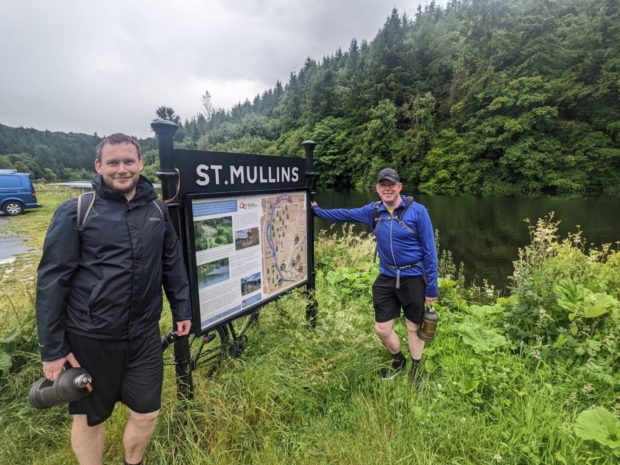 THE generosity of people and a father’s determination drove on two brothers to finish a 100km walk along the River Barrow last weekend. The Delaney brothers from Crettyard walked from Robertstown, Co Kildare to St Mullins in aid of the Ronald McDonald charity over three days.

John (37) and Cíarán (34) arrived soaked but in high spirits in St Mullins on Sunday. It had been a tough challenge, but ultimately a rewarding one, with over €5,000 raised to date for a charity.

“It’s wake-up call. We are getting older now,” joked John about the stiff legs. “We had stopped at Maganey at the Three Counties on Saturday morning for something to eat. To get out across the road afterwards was as big a challenge as anything.”

The fundraiser came about after Cíarán and his wife Katie’s newborn daughter Evie had been placed in intensive care with cystic hygroma. Cíarán and Katie subsequently spent 173 days in the Ronald McDonald House as Evie underwent life-saving care in Crumlin Hospital, while she is now back at home in Graiguecullen.

“Ronald McDonald is an extraordinary charity. It helps when you focus on the goal to get through it,” said John. “Cíarán’s determination was through his daughter. He was doing it for her.”

John added that the generosity had been a big motivation.

“The support we got when money is tight and people still came out with donations made a huge difference. It’s not just the money. It spurs you on … you felt you did not want to let them down.”

The GoFundMe page ‘Barrow Way Walk in Aid of Ronald McDonald’ will remain open for a few more days for any further donations.