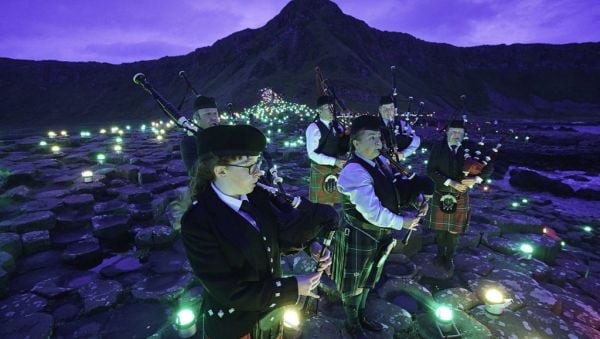 Hundreds of people have taken part in an artwork at one of Northern Ireland’s best known beauty spots.

Lumenators, carrying a low impact Geolight designed by Siemens, gathered at the Giant’s Causeway at dusk on Saturday for the third Northern Ireland event for Green Space Dark Skies.

The artwork was accompanied by music by renowned traditional musician Donal O’Connor. Clochan-na-bhFomharaigh, the Stepping Stone of the Formorians, was played by traditional music groups from the north coast, Belfast and Armagh on the stones.

The event was developed by outdoor art experts Walk the Plank.

Green Space Dark Skies is part of the Unboxed: Creativity in the UK project running from April to September 2022.

Green Space Dark Skies features events in 20 of the UK’s most outstanding landscapes across the four nations.

The next Northern Ireland event will be the grand finale on September 24 at Slieve Donard in the Mourne Mountains.

“We want to build more countryside stewards for the future, and to inspire more people to see the connection between their use and enjoyment of the land and our care for the planet.

“The moment when darkness falls, and we switch the lights off, is going to be the most important collective act of connection between people and nature within each event.”

“Through close local collaborations and partnerships we make sure that everyone involved will not only enjoy participating but that it leaves a lasting legacy.

“We hope the Lumenators involved in the Causeway Coast AONB (area of outstanding natural beauty) enjoyed the experience and we would encourage anyone who would like to take part to watch the forthcoming film and sign up now to avoid missing out on this experience in our finale location.”

Martin Green, chief creative officer of Unboxed, said: “Green Space Dark Skies perfectly demonstrates the innovation and creativity we have seen harnessed through the development of the 10 Unboxed projects to explore new ideas for a better future.

“By engaging artists, engineers, landowners and members of the public to create a series of unique experiences, Green Space Dark Skies will both enhance people’s understanding of our natural environment and relationship to the countryside as well as show the power of creativity to inspire change.”