CAB returned more than €5.5m to exchequer after seizures from criminal gangs 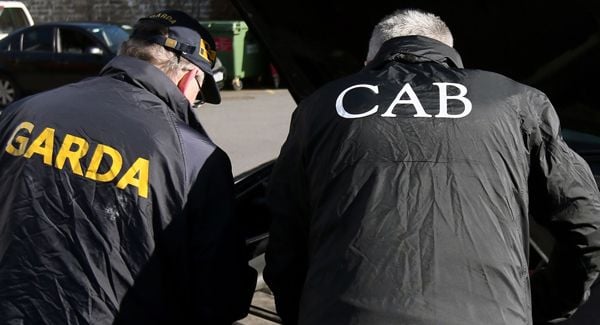 The Criminal Assets Bureau (CAB) returned more than €5.5 million to the exchequer last year following the seizure of assets and cash from drug dealers and criminal gangs.

Its annual report for 2021 found the CAB returned in excess of €5.4 million to six people identified in a Sim swapping fraud and cryptocurrency theft.

The report revealed that CAB returned in excess of €5.5 million to the exchequer, which comprised of €4.4 million in Revenue settlements, €1.14 million in proceeds of crime and €0.364 million in social welfare recoveries.

Last year, the CAB continued to target those seeking to conceal the proceeds of criminal conduct within businesses trading in used cars.

Tax assessments were made for €0.3 million excluding interest on three people suspected of laundering the proceeds of criminal conduct through businesses involved in the sale of used cars.

The bureau made collections amounting to €0.8 million from five individuals and one corporate entity involved in the motor trade.

The bureau also made assessments on 24 people deemed to have benefited from profits or gains derived from the sale and supply of illegal drugs.

Tax assessments totalling €3 million, excluding interest, were made in these investigations.

The CAB also focused on rural crime and a number of the bureau’s actions were in support of law enforcement in regional locations, the report said.

Minister for Justice Helen McEntee said that the CAB has been a “vital tool” in the fight against organised crime.

“CAB hits criminals where it hurts – in their pockets – by targeting the ill gotten gains of criminal conduct,” Ms McEntee said.

“In 2021, the 25th anniversary of the bureau, over €5.5 million was returned to the exchequer. I am also pleased to note the recovery and return in one notable instance of €5.4 million to six defrauded injured parties.

“Earlier this year I launched the Community Safety Innovation Fund Scheme which will reinvest proceeds of crime seized by CAB back into the communities that need it.

“We are also looking at how best to support CAB in its important work – last year my department completed a review which presented a number of recommendations.”

Ms McEntee said she was prioritising reducing the timeframe for the making of a disposal order.

Currently, once the High Court has determined that an asset is a proceed of crime, it can take a further seven years before it may be ultimately confiscated.

“My intention is to substantially reduce the statutory timeframe before a disposal order can be made from seven years,” Ms McEntee added.

“Reducing this period would mean that those who generate criminal assets cannot benefit from them for extended periods.

“It would send a message to those involved in organised criminality that they will not be allowed to enjoy the profits of their illegal activity, and it will show communities that we take organised crime extremely seriously.

“I also want to give CAB the power to publish the names and specified details of tax defaulters who have made settlements with the bureau.

“Subject to the advice of the Attorney General I hope to be in a position to finalise a General Scheme for new legislation to progress these proposals and others in the autumn.”