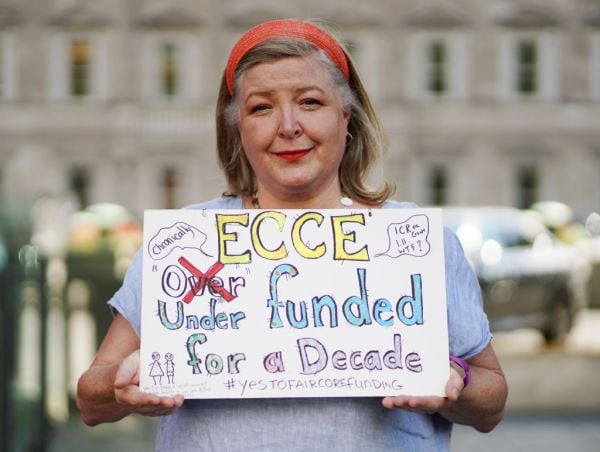 Childcare providers have condemned the Government’s planned support for the sector as unsustainable and unworkable during a demonstration outside Leinster House in Dublin.

The Federation of Early Childcare Providers said creche and preschool owners are committed to a series of closures this September over the Government’s Core Funding proposals for Early Childhood Care and Education (ECCE) providers.

The Government is looking at options on how to reduce the cost of childcare for parents as part of Budget 2023, including examining whether to increase the number of free hours available under the ECCE scheme.

But ECCE providers argue they cannot cap fees at last year’s 2.2 per cent rate of inflation, considering inflation is currently expected to reach at least 7 per cent for the year.

Speaking to the PA news agency, childcare provider Angie McGrath, based in Blackrock in south Dublin, said it is not worth her while joining the Government’s Core Funding scheme, and that changes in the budget will come too late.

She said: “We have to start in September. If I was to join Core Funding, I would be on minus [money] and they would have more ownership of my business.

“There should be some recognition in line with teachers who get paid during the summer, and who get paid to go on training courses – at the moment, we all do that out of our own time, or else we have to give back time, which means we have to get in more staff.”

Ms McGrath said the row comes at a time when there is huge demand for childcare services.

“I would have had 80 on my waiting list for this September,” she said.

“I don’t think there’s any other profession in the country that has such a low salary. I think personally it’s because women dominate the sector, no other industry would accept those terrible salaries that are supposed to be given to staff.”

When asked about the future of the sector, Fiona Kinch, from Leopardstown, warned: “We’ll be gone.”

When asked about the Government’s plans to reform childcare as part of the budget, Laois-based childcare provide Edith O’Sullivan said parents would benefit the most.

She added: “They’re taking away money from the preschool section, and inflation is going up to 8 per cent and we’re to raise the hourly rate of employees – everything is going up and there’s no extra money. They’ve actually taken the money away.

“So where do you go from there?

“We don’t know if it’s going to be sustainable down the road.”

It comes as Early Childhood Ireland, the leading organisation in the early years sector, called on the Government to include a five-year plan in Budget 2023 for the industry.

Frances Byrne, director of policy at Early Childhood Ireland, said: “Ireland has lagged at the bottom of international public investment tables for decades, and this legacy of under-investment has had a severe impact.

“Parents in Ireland pay some of the highest fees from take-home pay in the European Union. Providers, overly dependent on these fees, have operated precariously in a complex and fragile funding model.”

Minister for Children Roderic O’Gorman has previously acknowledged there is “very significant pressure” on childcare professionals.

He said: “There are three big challenges in childcare right now. The low rates of pay for staff, the sustainability of providers, and the high childcare costs the parents have to pay.

“As minister over the last budget and this budget, I’m working to significantly address all three elements.”