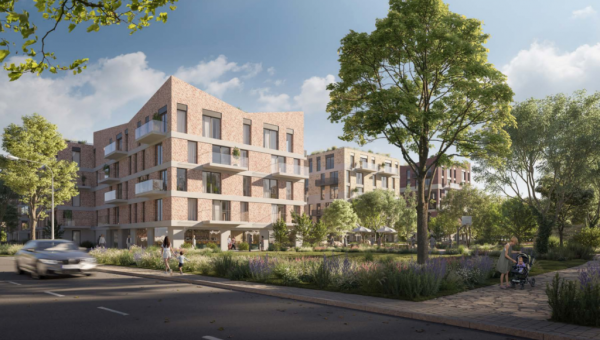 Residents in Terenure are opposing plans for a seven-storey high 364 unit ‘build to rent’ apartment scheme on former playing pitches at Terenure College in Dublin.

The Carmelite Order – which runs Terenure College and owns the substantial landbank at the college – state that the development will help secure the future viability of the college.

The plan by Lioncor – which also includes 21 houses – for the ‘build to rent’ and ‘build to sell’ scheme is the first to be lodged with Dublin City Council under new planning rules for large scale house developments that will replace the contentious Strategic Housing Development (SHD) system.

A letter enclosed in the planning application from Provincial of the Irish Province of Carmelites, Fr Michael Troy has told the City Council that “the board of management and the Carmelite Order recognise the enormous benefit that this proposed development will have for the school and the Order”.

Fr Troy states that the development “will allow for a capital injection into Terenure College and secure the college’s future viability as a secondary school as well as benefit the ongoing work of the Carmelite Order in Ireland, Zimbabwe and other parts of the world”.

However, to date over 30 objections have been lodged against the scheme by local residents.

In one objection, Dr Paul Redbond has told the council that the scheme “would seem to be excessive in terms of density and height”.

Local, Kenneth Ward has contended that the seven-storey height of the development “will result in a complete loss of privacy for the existing properties which will now be overlooked” and that the build to rent model “would introduce a very large transient population that would not in any way be rooted in the community”.

Local couple, Mark Carroll and Fionnuala Crennan state that “we welcome a proposed new development on this site as it is badly needed, but it must be done in a proper manner. We all know that there is a housing crisis but building thousands of build to rent schemes in the city charging extortion rents the majority of which people can’t afford is no the way to solve it”.

They state that “the idea of build to rent in this area is completely unsustainable and unsuitable in a settled neighbourhood like ours”.

They state that “the density is extremely high and is completely out of character with the surrounding area”.

In his own objection, Colin McKeon has told the city council that the ‘build to rent’ aspect is not in line with the area “which is a mature residential suburb of Dublin”.

Mr McKeon contends “that the transient nature of occupants of a build to rent development will bring no lasting value to there and does not lead to a sustainable and mature development.”

He adds: “I strongly object to the nature of build to rent and the effect it will have on the whole area.”

Mr McKeon states that the seven-storey skyline will completely change the skyline in the area.

A planning report lodged with the LRD application states that the proposed development “will deliver high quality urban design and will contribute positively and integrate well into the surrounding environment”.

Armstrong Planning state that the scheme will help address the housing shortage identified in the National Planning Framework by ensuring the delivery of comfortable, well planned residential units and provide an alternative to larger houses that dominate the area.

The planning report states that the seven-storey height exceeds building heights that are generally permitted for the area in the City Development Plan but argues that Government Building Height Guidelines leave it open for the Council to approve such a development.

The closing date for objections is July 18th.