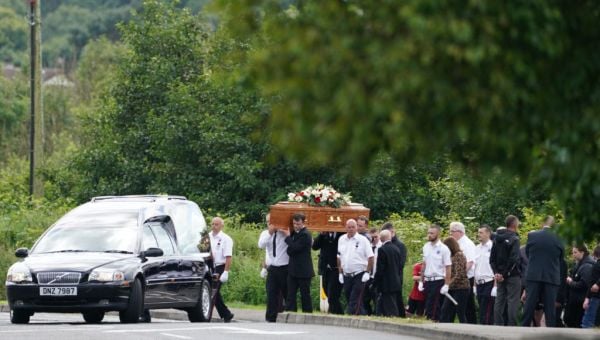 Several hundred mourners have attended the funeral of a man who died after he fell from a bonfire in Co Antrim.

The funeral cortege passed the site of the bonfire in the Antiville estate in Larne where John Steele died on Saturday.

Mr Steele, a window cleaner and father-of-two in his 30s, was helping to construct the towering pyre when the incident occurred.

The bonfire, constructed from stacked wooden pallets, was more than 50ft tall.

The funeral service took place in Mr Steele’s home in the Antiville estate. A large number of mourners gathered outside the house and listened to the service which was broadcast by speaker.

Mourners were also that the family were thankful to all those, including the emergency services, who helped Mr Steele on Saturday, and they had been overwhelmed by the support they had received since his death.

His coffin was then carried from the house and along the street while the cortege followed, past the bonfire site and on towards Larne Cemetery.

Floral tributes adorned a wall near the site where Mr Steele fell.

The bonfire where he fell was located on land owned by Mid and East Antrim Council.

It was one of around 250 that were built in loyalist areas across Northern Ireland to mark the Twelfth of July.

The bonfire was taken down on Sunday afternoon and the remnants were set alight at a vigil for Mr Steele on Sunday night.

The council confirmed on Monday that an investigation had been instigated into the fatal fall.

The Antiville bonfire was situated close to another in the Craigyhill estate in Larne, which organisers believe has set a new world record as the tallest ever built.