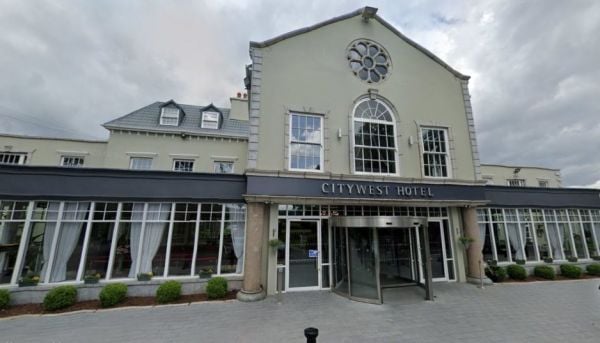 A man who smashed up 21 doors at Citywest Hotel causing over €7,000 worth of damage left a “trail of absolute destruction” behind him, a court has heard.

Gerard Hughes (25) of Swiftbrook Park, Tallaght, was sentenced to a year in prison after he pleaded guilty to criminal damage at Citywest Hotel, Saggart, Co Dublin on September 5th, 2018.

He was further handed a consecutive sentence of 18 months in custody for possessing cannabis for sale or supply at his home on March 1st, 2021.

Giving evidence on Thursday at Dublin Circuit Criminal Court, a prosecuting garda said several witness statements were made by residents and security staff at Citywest Hotel.

Full-time security officer Conor Flynn told gardaí that on the night in question, he got a call from the night porter saying several residents were complaining about noise in some of the corridors.

He went to the fourth floor where he heard banging coming from a room reserved for staff; there he found Hughes in the process of trying to smash open a safe with a fire extinguisher.

Hughes said he was sorry and that he would “take it on the chin,” but security staff said he seemed very agitated and ran out a fire exit door.

Staff detained Hughes in the car park until gardaí arrived and found him rolling around in an intoxicated state.

Noel Devitt BL, prosecuting, said the hotel had to pay €7,717 to repair the damage caused.

The court also heard that an office in the hotel had been broken into and “turned upside down”, and the keys for this office were later found on Hughes’ person.

Hughes was not a resident of the hotel at the time. He was interviewed later and when shown CCTV footage, he told gardaí, “I won’t deny it was me. I’m ashamed to see myself like that, I’m very sorry.”

Hughes told gardaí that his brother Stephen had been murdered in an arson attack a year previously and that he had been attending the anniversary mass. He said he had just been told that his brother’s killer was appealing his sentence.

Gardaí agreed with Sarah Jane O’Callaghan BL, defending, that Hughes was very distressed and remorseful and agreed that it was “madness”.

“He left a trail of absolute destruction,” said Ms O’Callaghan.

Garda Will Garbett gave evidence on the second bill where gardaí got a warrant to search Hughes’ home in March 2021.

They found cannabis valued at €3,846 in a shopping bag above the kitchen fridge, which Hughes accepted he was selling. Gardaí also recovered other drugs paraphernalia including a digital weighing scales and bagging material.

He was on bail at the time for the criminal damage offence.

Hughes has 81 previous convictions including drugs offences, criminal damage and a pending sentence of robbery and endangerment.

Gda Garbett agreed with counsel for the defence that Hughes was an addict who had accrued a drug debt and was dealing drugs among his friends at a very low level.

The court heard that there was no evidence of luxury in Hughes’ lifestyle and that any money he made from drugs went into his debt.

Ms O’Callaghan said Hughes had been a very talented footballer with Shamrock Rovers and that although he had been in and out of chronic addiction, he was always able to turn his life around and get employment in areas like construction and healthcare.

Ms O’Callaghan said Hughes’ mother, who was present in court, was “utterly broken-hearted” as her son had finally got his life together and had been in a stable relationship with his partner for years.

The court heard that Hughes was very cooperative with gardaí who knew him well and liked him.

Judge Martin Nolan backdated the sentences to May 21st of this year, when Hughes went into custody on a third unrelated matter of robbery and endangerment.

He is due to be arraigned in this matter on October 6th.