Residents at wits’ end over dust and dirt from trucks 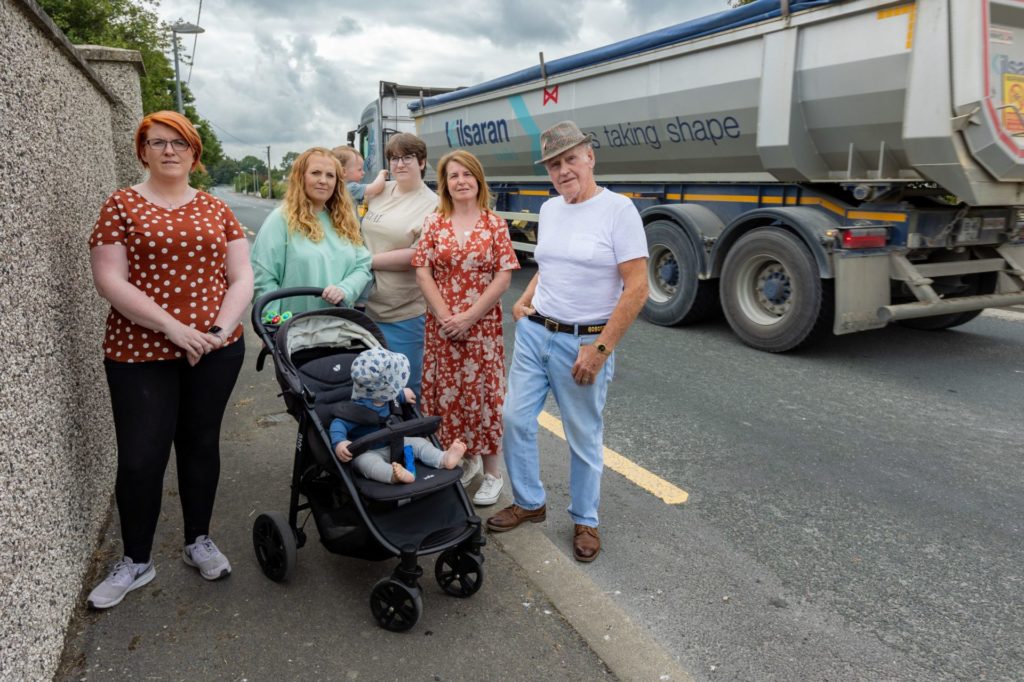 Mick Dowling along with his daughter Fiona, granddaughters Corina, Sharleen and Kayleigh and great grandchildren Finn and Luca highlight the damage that the constant flow of trucks is doing to the neighbourhood at Prumplestown, Castledermot
Photo: michaelorourkephotography.ie

NOISY lorries passing by their homes from early morning, vibrations damaging boundary walls and never-ending dust and dirt, making it impossible to open their windows – residents at Prumplestown, Castledermot have had enough.

Local residents this week spoke out about their ongoing difficulties living alongside the Dan Morrissey quarry at Ballyburn, Castledermot, which is located on the Carlow/Kildare border.

“I noticed this morning the first lorry arrived at 5.50am, the noise of it lifted me out of the bed … the rattling and vibrations,” complained resident Mick Dowling.

Mick pointed out that an 80kph speed limit outside the 12 homes from Prumplestown Cross to the quarry is wholly inadequate, given the frequency of the lorries travelling to and from the quarry, often carrying up to 40 tonnes of gravel.

“They are going up and down past our houses all day. The majority are not covered, and with all the sand and dirt you can’t even open a window,” he said. “The 80kph speed limit is just ludicrous – we’ve 12 houses here, and ten children coming and going.”

Fellow resident Fiona Fitzgibbon is also concerned about the damage this constant traffic is causing to the road and boundary walls. The high wall in front of her home now has a ten-metre crack running through it. “That wall is ready to fall and I’m afraid to let the grandkids near it,” said Fiona.

Fiona confirmed that she has contacted Dan Morrissey at Ballyburn to voice her concerns, both phoning and emailing the company a number of times over the years. Prior to the pandemic, Fiona told The Nationalist that she did meet a member of Dan Morrissey’s senior management and showed him the crack in her wall; however, she says that nothing emerged from that meeting.

Mick Dowling states that over the years residents have contacted the gardaí, local councillors and Kildare County Council to voice their concerns, but “nothing has happened”.

“This is a last resort for us. I really think an alternative entrance should be found from the quarry. It isn’t suitable to have that number of lorries – maybe up to 50 a day – passing by all these houses,” added Mick.

The Nationalist contacted Dan Morrissey’s quarry at Ballyburn, Castledermot; however, at the time of going to press, no response had been received.