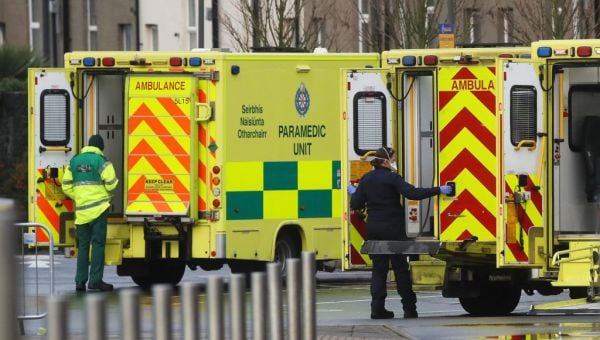 A retired garda who suffered a brain haemorrhage after he fell and hit his head while visiting Spike Island in Co Cork was left waiting for an ambulance for close to two hours after paramedics were sent to calls deemed higher priority, an inquest has heard.

This was less than a day after he was taken onsite by ambulance after he suffered a fall while walking up a gangway from a ferry to Spike Island. The accident happened shortly after 11am on July 7th, 2021.

Advanced HSE paramedic James O’Brien told the inquest that the National Ambulance Service Control Centre received a call at 11.32am, and other ambulances were dispatched to deal with the accident. However, ultimately they were diverted elsewhere.

The Dungarvan-based paramedic and his colleague Paul Murray had just left a patient at Mercy University Hospital in Cork city when they were dispatched at 12.47pm to Cobh to Mr Horgan. They arrived onsite at 1.22pm.

Mr O’Brien said the pensioner was conscious and lucid. They performed various tests on him and carried out an electrocardiogram test. They set up intravenous access and left for CUH at 1.59pm.

However, when they were about 10 minutes from the hospital Mr Horgan began to lose consciousness. He also vomited twice.

Mr O’Brien contacted the hospital to warn them that he believed that Mr Horgan may have had a brain bleed. When they arrived at the hospital 10 minutes later a full resuscitation team was on standby to receive him upon transfer.

The pensioner had suffered a significant brain bleed. Despite the best efforts of hospital staff he further deteriorated and died the following day.

Mr O’Brien said the diverting of ambulance from one call-out to what was seen as a more priority case was a common event as the service was “completely under resourced … and you can get lucky or unlucky”.

He said he had no idea how many ambulances had been already sent to Mr Horgan only to be diverted elsewhere.

“We know nothing about dispatching – for me, in this case there was no delay – we go job to job.”

He said the delay in having an ambulance attend at the scene was a matter that should be directed at management of the National Ambulance Service.

Mr O’Brien said the pensioner was lucid with a Glasgow Coma Scale reading of 15, which was good. While Mr Horgan had informed him he was on anti-coagulant medication, Mr O’Brien did not have any major concerns for him prior to his sudden deterioration in the ambulance.

Meanwhile, Noel McCarthy, head of the tour guides on the day and a trained first responder with Spike Island Development Company, said he went to Mr Horgan after he hit his head. Mr Horgan told him he had no recollection of what had happened. However, he showed a good level of responsiveness and engaged with Mr McCarthy.

Mr McCarthy said he called the National Ambulance Service at 11.29am to tell them what had happened.

Assistant State Pathologist Dr Margaret Bolster said Mr Horgan had incurred a skull fracture in his fall. However, he had sustained a subdural haemorrhage in the brain which can often be quite slow. As the volume of blood and pressure builds up it can lead to a sudden loss of consciousness.

She said the cause of death in the case was a shortage of blood flow and oxygen to the brain due to a fall. She said that as a general principle the sooner a person gets to hospital the better.

Cork City Coroner Philip Comyn noted the original ambulance dispatched to Mr Horgan was diverted for reasons unknown to the inquest. He said this also happened a second time when another ambulance was diverted to a higher priority case, leading to a delay of over one hour and 50 minutes.

He noted that Mr Horgan’s deterioration was ultimately very quick but the event which precipitated his death was an accidental fall on the gangway. Mr Comyn returned a verdict of accidental death. He offered his condolences to the family following their tragic loss.