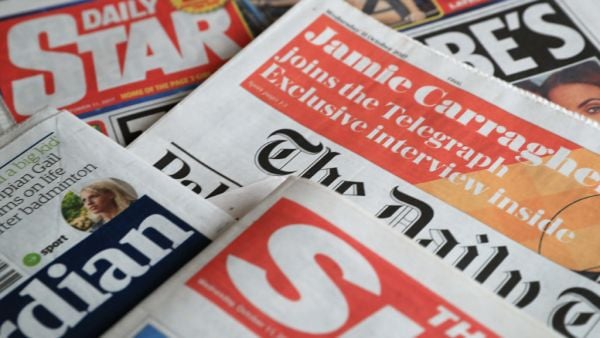 The State running out of beds for Ukrainian refugees, Government polling numbers and a significant High Court ruling which allowed a farmer to keep his land in a debt case features on Thursday’s front pages. Meanwhile, Met Éireann have issued a high temperature advisory warning with temperatures set to hit 30 degrees. 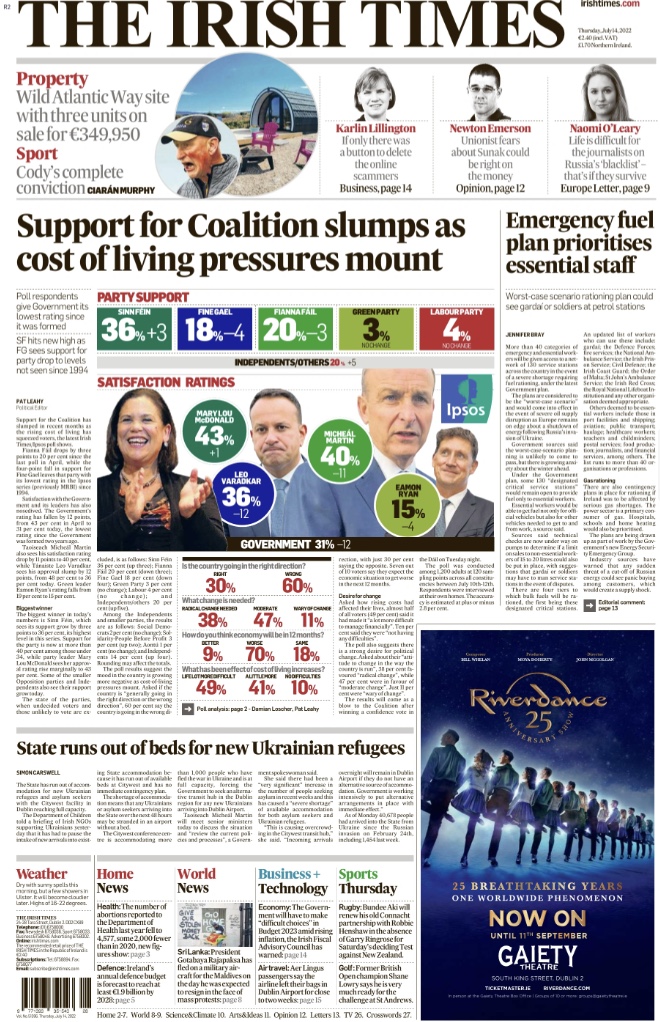 The Irish Examiner reports that the State has run of beds for Ukrainian refugees as tents are to be erected at the Citywest refugee facility in Dublin. It reports that dozens of refugees are sleeping on chairs and the tents will be a short-term solution to deal with the backlog. It also reports that Ireland recorded what it is thought to be its first right wing terrorist arrest in 2021. 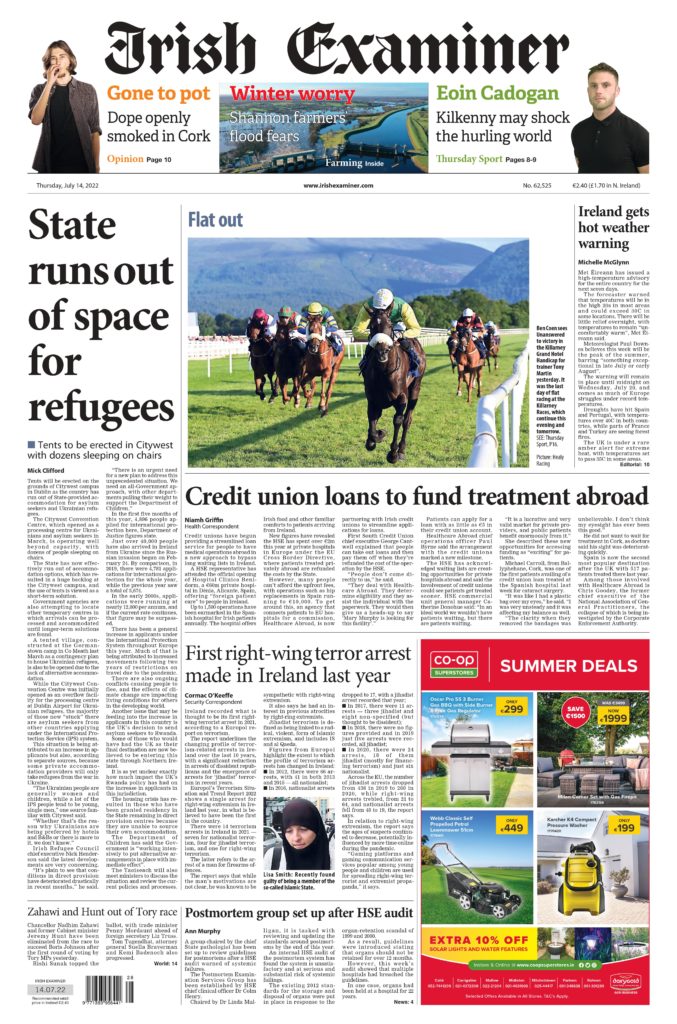 The Irish Independent reports that a farmer has been allowed to keep his home and farm following a debt case in which he owed 1.1 million. The landmark High Court ruling means farmers will be able to avoid the forced sale of their land to clear debts. The court found that the farmer could be considered insolvent and therefore eligible to avail of a personal insolvency agreement. 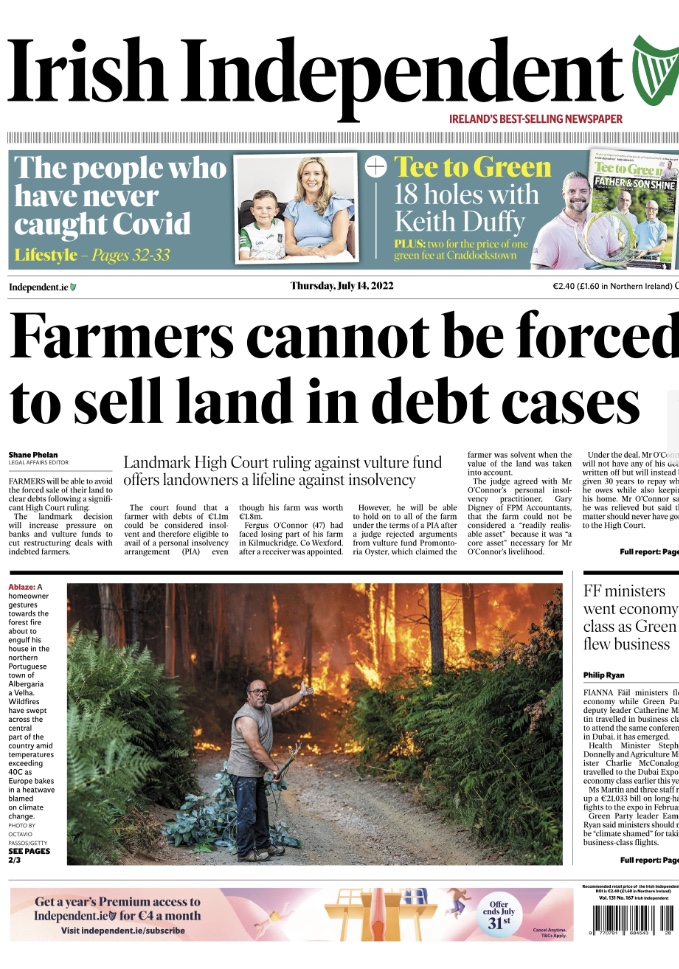 The Irish Daily Mail reports that Ukrainian refugees were last night sleeping on chairs in Dublin Airport as the State ran out of accommodation. 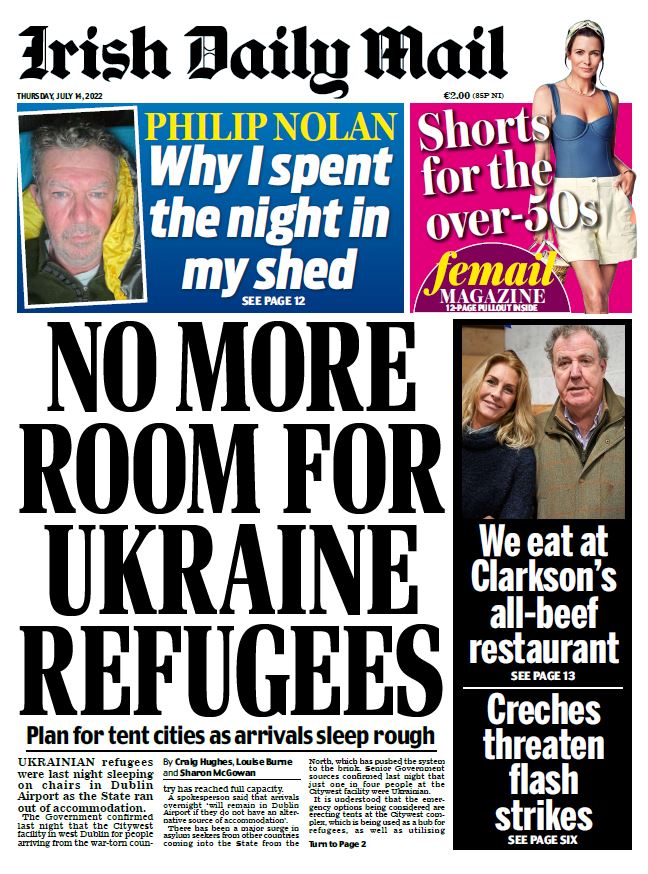 In the UK, the surprising rise of Penny Mordaunt leads many of the papers on Thursday.

The Times, The Independent, the Daily Express and i all report Ms Mordaunt has surged into contention in the race to succeed Boris Johnson following the first round of voting by Tory MPs.

Thursday’s TIMES: “Surge for Mordaunt in race to be Tory leader” #TomorrowsPapersToday pic.twitter.com/AevPbRp7KL

Front page: It’s hotting up! Mordaunt surges in race for No10 #TomorrowsPaperToday

The Daily Telegraph and Metro also lead with Ms Mordaunt seizing momentum in the leadership contest after receiving 67 votes.

Tomorrow’s paper today 📰
PM FOR PM?
🔴 Mordaunt favourite to be next premier in Tory poll#TomorrowsPapersToday pic.twitter.com/Q8bPbqcxui

The Sun says she received the second-most votes behind Rishi Sunak, with the field of contenders narrowing to six.

On tomorrow’s front page: Rishi Sunak warns squabbling Tories it’s time for a ‘grown up conversation’ as he powers ahead in race to be next PM.https://t.co/8tS2H8yAdx pic.twitter.com/GlV28B7L49

The Guardian reports Ms Mordaunt’s success has put pressure on Liz Truss, while the Daily Mail says the Foreign Secretary has urged the Tory right to unite behind her.

Britons are using washing-up liquid as shampoo amid the cost-of-living crisis, according to the Daily Mirror.

And the Daily Star says dogs make the best wingmen.

Man’s best friend could also be your wingman 🐶 🐾🍺https://t.co/SY2Gp6GzwE#tomorrowspapertoday pic.twitter.com/jZZtNJzat4