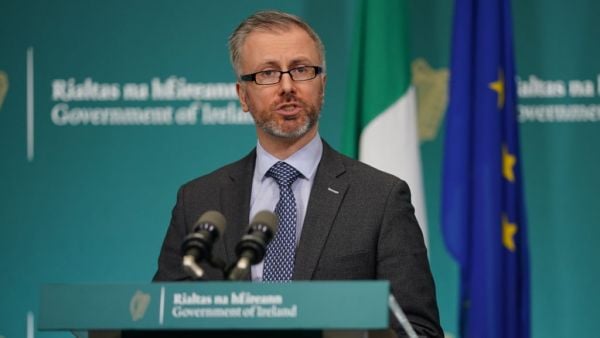 Minister for Children Roderic O’Gorman has defended the Government’s assertion that the UK’s Rwanda policy has caused an increase in the number of asylum seekers travelling to Ireland.

It comes after Taoiseach Micheal Martin said the UK government’s Rwanda scheme may have resulted in an increase in international protection applicants here.

Mr Martin made the comments after it emerged on Wednesday night that the State had a “severe shortage” of accommodation for Ukrainian refugees.

Mr O’Gorman was asked on RTÉ News at One why he thought there had been such a substantial increase in the number of people seeking international protection.

“I think, probably, there were pent-up demand there following Covid,” he said.

“I think the impact of changes in policy in the United Kingdom in terms of migration have had a significant impact.”

The State has taken in around 40,000 refugees fleeing the war in Ukraine – the majority of them women and children.

Asylum seekers from other countries also continue to seek sanctuary in Ireland through the International Protection Service.

Mr Martin added that around 70 per cent of those at the refugee reception centre at Citywest in Dublin are not Ukrainian citizens.

Earlier on Friday, Enda O’Neill, head of office with UNHCR Ireland, told RTÉ Radio’s Morning Ireland that he had not seen “any evidence” that supported that the UK’s Rwandan policy had impacted the numbers seeking asylum in Ireland.

“I haven’t seen any strong evidence to suggest it’s a major factor,” he said.

“The Government may be able to point to data that it has to support that.

“But I think it’s probably best understood in the wider context of this is one policy in a number over recent years on asylum in the UK which contrasts favourably to a much more open approach that we’ve been taking in Ireland.”

He said that while it was almost twice 2019’s figures over the same period, it would not be “outside the norms” of what Ireland has received in “years gone by”.

“I suppose we have to be conscious of the fact that we’re coming on the back of two very difficult years during Covid when travelling was very difficult,” he said.

“So if you go back to 2019, and compare it to that period, it’s a little under double the figures for that period. So for Ireland, it is a significant increase in comparison to last year, but it wouldn’t be outside the norms of what we have received in years gone by or in other European countries.”

Mr O’Gorman was asked about Mr O’Neill’s comment that there was not any “strong evidence” that the Rwanda policy was a factor.

“I think the approach being adopted by the UK is having a difference,” he said.

“And we are seeing across Europe, significant increases in the number of people seeking international protection.

“Certainly our sense is that the change in approach by the UK government is having an impact.”