SOME teams are running out of time if they are going to get their Championship season reaches a crucial. The must-win tie between Naomh Eoin and Bagenalstown Gaels on Saturday would appear to be the weekend’s standout tie.

These two teams will forever be associated with that late Naomh Bríd goal in 2008 which deprived Rangers of a three-in-a-row. The two clubs have gone in opposite directions since and there is nothing here to indicate anything but a big victory for the reigning champions. 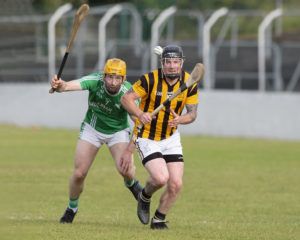 This is a classic four-point game. Bagenalstown Gaels were disappointing when beating Naomh Bríd while the Myshall side still have to register a win in the championship. If form continues as it is then there is every chance that it could be the head to head result to determine who finishes in the group stages and who finishes above Naomh Bríd who look to be struggling. If Naomh Eoin can avoid the concession of frees, keep Craig Doyle quiet and play as well as they did in the final quarter of their game against Rangers then they could prevail. For Bagenalstown, Paddy McDonnell is flying and one to watch.

Ballinkillen have history against St Mullins and will not fear them. On the other hand, the Carlow kingpins of senior hurling have blown hot and cold in their games so far. At any point, they can look like potential champions and but minutes later appear quite ordinary. Perhaps, their ability to fashion a win when they looked like losing to Bagenalstown Gaels is an indication of where they are. Paddy Boland scored seven points in the absence of James Doyle who got married recently.

For Ballinkillen, David English is playing as well as ever and while Sean Murphy and Ciaran Whelan are also in form, the team as a whole just don’t seem to be moving well.

With Ballinkillen getting a mauling from Rangers and Carlow Town losing to St Mullins, this is a game both sides will welcome rather than facing another big contender. Based on their previous defeat to Rangers, it is hard to make a case for the home side while Carlow Town did well against Bagenalstown Gaels before shipping a six-point defeat.

A bit like their senior counterparts, St Mullins can be inconsistent but they  shocked Rangers in their opening game striking late for the winning score.  In a thrilling game against Naomh Eoin they lost by six points. Bagenalstown Gaels won their only game so far beating Carlow Town with David Corcoran scoring 1-3.

Whether it is in the knock-out stages or in a group game this is always a tasty encounter. Ciaran Abbey scored 0-10 against St Mullins last time out while Declan Nolan nailed 1-2.