O’Dwyer on the line for Sunday’s big game

It will be a bitter-sweet experience for top-class Carlow referee, Paud O’Dwyer, when he steps onto the Croke Park pitch as linesman for the All-Ireland senior hurling final between Limerick and Kilkenny on Sunday. 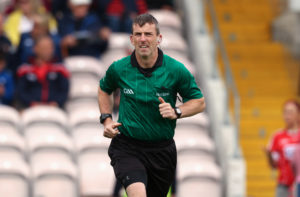 Paud O’Dwyer will be a sideline official for Sunday’s All-Ireland Hurling Final between Limerick and Kilkenny
Photo: ©INPHO/Tom Maher

It is always a huge honour to be involved in any capacity on hurling’s biggest day  but with only one year to go as a member of the referees championship panel he has never refereed an All-Ireland senior intercounty final.

Now he is running out of time if he is to get the big one. In two year’s time, he will be over 50 years of age and will not be eligible to referee the top games.  The Palatine man has been on the line in four senior finals.

Colm Lyons of Nemo Rangers in Cork has been confirmed as the senior final referee while Liam Gordon of Galway the stand-by referee. The fourth official is Michael Kennedy of Tipperary.

Over the years, O’Dwyer’s umpires, Tommy Fitzharris, John Kelly, Paul Treacy and Gerry O’Neill have been a model of consistency and have rarely, if ever, made an error. With other back-up umpires including the popular Cormac Holloway also making a major appearance this year, O’Dwyer has surrounded himself with people who he can trust and rely on. For them, it must also be a bitter disappointment. The Carlow man would be the first to admit it is an honour to be involved but for his umpires the ultimate experience of an appearance on the Field of Dreams for All-Ireland senior final Sunday looks set to pass them by.