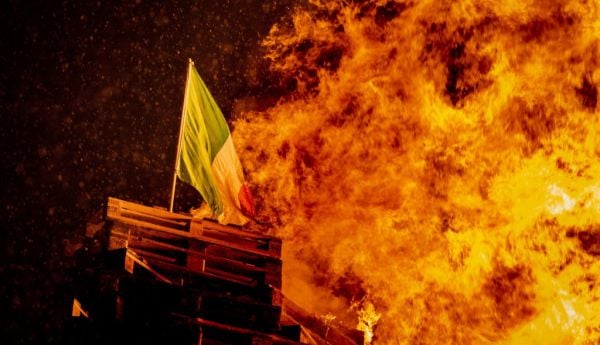 The burning of posters and effigies of people on Eleventh night bonfires should be treated as a hate crime, the grand secretary of the Orange Order has said.

There has been widespread condemnation after photographs emerged of hanging effigies of Sinn Féin president and vice-president Mary Lou McDonald and Michelle O’Neill, as well as Alliance Party leader Naomi Long, on a bonfire in Carrickfergus, Co Antrim on Monday.

The PSNI has launched an investigation into the incident.

🧵So, having become accustomed to seeing my posters burned on bonfires, I honestly thought nothing could shock me anymore. However, late last night I received photos of effigies of me, @moneillsf and @MaryLouMcDonald hanged on the bonfire at Glenfield in Carrickfergus. >

Rev Mervyn Gibson said there is no question the incidents are hate crimes.

He also said the Tricolour flag should not be burned on bonfires, but he is not sure if that constitutes a hate crime.

Rev Gibson pointed out that the majority of the estimated 250 bonfires passed off without incident, but said one or two caused some concern.

“I think this needs to be addressed but I don’t think it’s through legislation, I think work needs to be done with the bonfire builders and the local communities and councils to try and come up with solutions to those who still think it’s alright to burn posters or effigies on bonfires,” he told BBC Radio Ulster’s Good Morning Ulster programme.

“The police are investigating to see if a crime has been committed so that implies there could be legislation to deal with this already.”

Rev Gibson said he does not see any justification for burning the Irish flag, but said that is different to burning posters or effigies of people.

“I’d prefer to see no effigies or flags on a bonfire,” he said. “Bonfires are about the celebration of unionist and loyalist culture, and I don’t think we need to denigrate another culture or another country so we can celebrate.

“I think it is wrong to burn a flag, whether it should be legislated against, the jury is out for me on that one, but I have clearly said it is wrong.

“Going back to posters and effigies, there is no question about that, they, for my mind, should be a hate crime, I have no difficulty in saying that. Whether they are or not, I don’t know. But if you burn an effigy or burn a photograph of someone else, you obviously dislike them so much you hate them, so that would be for me a hate crime.”

The Orange Order does not organise bonfires. The pyres are generally planned and built by local community groups and lit the night before the Twelfth of July parades run by the Orange Order.

“We saw flags and posters being burned and we saw a man’s life being tragically lost, and for me this is not culture, it’s not a celebration, they are criminal acts designed to deliberately provoke and to offend,” he said.

“There is an urgent necessity for leadership and this needs to be called out and it needs to be condemned quickly and unequivocally, and those who hold positions of leadership need to work to ensure that we are not back year after year discussing acts that quite frankly make the rest of the world scratch their heads and ask how on earth is this still happening in 2022.”

Assistant Chief Constable Bobby Singleton said the PSNI had received a number of complaints “relating to election posters and other emblems being placed on bonfires”.

He added: “We are gathering evidence in respect of these complaints in order to establish whether criminal offences have been committed and whether persons can be made amenable for them.”

Father-of-two John Steele died after he fell from a bonfire he was helping to build in Co Antrim.