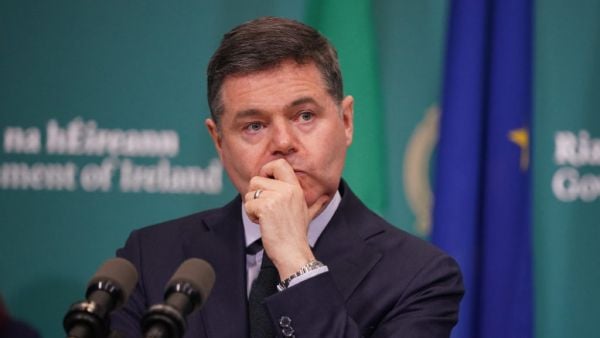 Minister for Finance Paschal Donohoe has played down high GDP figures, warning that domestic economic growth slowed in the first quarter of the year.

Mr Donohoe said the growth this year was driven by a 5.3 per cent increase in exports.

“It is important to put this strong growth in context,” he said.

“This growth has come from a very small number of multinational-dominated sectors, with limited connections to the domestic economy.

“As I have said for a number of years now, GDP is not an accurate measure of what’s going on in the Irish economy, and this view has been reinforced by today’s numbers.

“I place a much greater emphasis on measures such as modified domestic demand, which better reflects the underlying domestic economic activity.”

Modified domestic demand (MDD) – which is the sum of personal and government consumption and investment, and excludes things like changes in the value of stocks – grew by just under 6 per cent last year, driven by a rise of 4.5 per cent in consumer spending.

In the first quarter of this year, MDD contracted by 1 per cent as consumer spending fell by minus 1.3 per cent in the face of the Omicron wave of Covid-19 and the economic fallout from the war in Ukraine.

“The combination of restrictions associated with the Omicron wave in January and the surge in energy and other commodity prices weighed heavily on demand over the quarter. Faced with the uncertainty associated with the war in Ukraine and mounting cost-of-living pressures, households cut back, with consumer spending falling by 1.7 per cent.

“Today’s release underscores the challenges our economy faces. Momentum in the domestic economy and that of our trading partners is slowing and inflationary pressures are mounting.”

The estimated rate of inflation for the year is between 7 per cent and 8 per cent.

Despite calls from opposition parties to announce further measures to help people with the cost of living before the Dáil rose for the summer recess on Thursday, the Irish Government says it had already announced a back-to-school package, an energy grant and a cut to fuel prices, arguing that further support would be announced as part of the ‘cost-of-living’ Budget in September.

Mr Donohoe said: “It is neither affordable nor appropriate to absorb all of the price shock.

“Borrowing costs are on a rising trajectory and our tax base is increasingly reliant on a small number of MNCs.

“Meanwhile we must ensure that policy doesn’t inadvertently add further inflationary pressures into the system.”