Talking points ahead of Ireland’s series decider against New Zealand 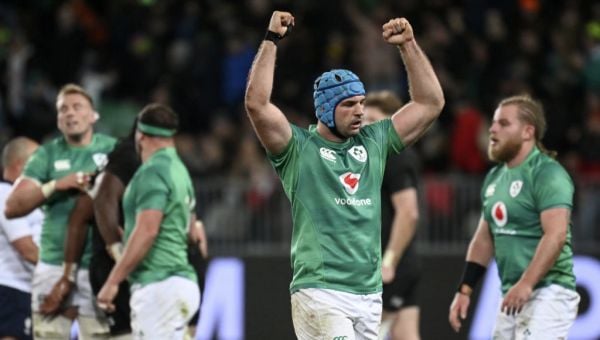 New Zealand and Ireland meet on Saturday for a titanic series decider at Sky Stadium in Wellington.

Ireland claimed a landmark first away victory over the All Blacks last weekend in Dunedin to level the three-match contest following an emphatic loss in the Auckland opener.

Here, the PA news agency picks out some of the main talking points ahead of a mouth-watering finale.

More history in the making?

💬 “Everyone on Tour pushing together in the right direction over the next few days is going to be a hell of a force for us.” 📈#TeamOfUs | #NZvIRE

New Zealand have not suffered a series defeat on home soil since losing 2-0 to France 28 years ago.

Following an alarming start to their tour, Ireland responded in style to wrestle the momentum from their formidable hosts and stand a genuine chance of achieving one of international rugby’s rarest feats.

The Irish have now won four of the past seven meetings between the two nations to significantly lessen – if not dispel – the fear factor of taking on the All Blacks.

Head coach Andy Farrell says the opportunity for his side is “like gold dust” and hopes the “best is saved till last”. Emulating the exploits of the 1994 French team will move Ireland to the top of the world rankings, above Les Bleus.

Pressure mounting on All Blacks coach

Ian Foster has turned to experience in a bid to avoid an upset as he battles to convince the expectant New Zealand public of his capabilities.

The Kiwi head coach has come under fire on the back of three defeats from his last four Tests.

Although Foster – who served as assistant under predecessor Steve Hansen – has his critics, the current media consensus suggests his job is not on the line just yet.

Better than a World Cup semi-final?

Ireland’s failure to so far reach a World Cup semi-final is well-documented. Yet Irish great Brian O’Driscoll believes a tour triumph over the All Blacks would be a greater achievement.

The Kiwis were the most-recent side to deny Ireland a maiden last-four appearance, thanks to a 46-14 win in Japan three years ago. Retired centre O’Driscoll feels joining the exclusive list of teams to have enjoyed series success in New Zealand would represent “tangible” reward for Farrell’s men and could be worn as a badge of honour.

With a World Cup quarter-final rematch against New Zealand a possibility next year in France, victory would certainly enhance growing belief within the Irish ranks.

New Zealand’s quest to wrap up the series at the first opportunity was severely undermined by indiscipline.

First-half yellow cards for Leicester Fainga’anuku and Ofa Tu’ungafasi disrupted the All Blacks’ game plan in Dunedin and were swiftly compounded by the dismissal of Angus Ta’avao due to a dangerous tackle which has deprived the Irish of Garry Ringrose.

With the hosts counting the cost of their second-Test indiscretions, Farrell – who briefly lost vice-captain James Ryan to the sin bin – insisted World Rugby’s rules are “clear”.

He also said his side do not put referees under pressure by playing “on the edge”. English official Wayne Barnes takes charge this weekend.

While there is understandably more focus on the bigger picture, this weekend is likely to bring a major personal milestone in the career of Johnny Sexton.

The Ireland skipper, who celebrated his 37th birthday on Monday, is closing in on becoming only the second man to reach 1,000 points in the green jersey. He has already managed 78 points against the All Blacks and requires just six more to make it to four figures overall.

Only Ronan O’Gara (1,083) has managed more. Sexton holds a better points-per-game average than former fly-half rival O’Gara and, on the occasion of his 108th cap – moving him level with Paul O’Connell – will be desperate to drive his team to glory.