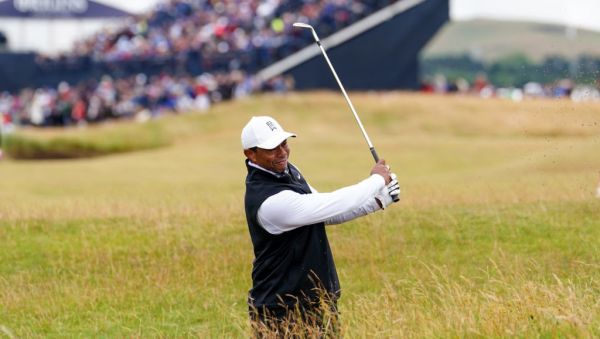 Tiger Woods was set to miss the cut in the Open Championship for just the fourth time in his career on Friday.

The winner at St Andrews in both 2000 and 2005, Woods struggled to an opening 78 and calculated that he needed a second-round 66 to make the weekend, a score he last achieved in a major in the 2018 US PGA.

A par on the first was a two-shot improvement from Thursday, when his approach had to be played from a fairway divot and plunged into the Swilcan Burn, while a first birdie of the day soon arrived from 28 feet on the third.

However, Woods then three-putted from long range on the fourth and, although his approach to the next finished just a few feet from the flag, it was unfortunately the flag for the 13th hole on the enormous double green.

Faced with a putt of 45 yards, Woods unsurprisingly left his eagle attempt short and could not convert the birdie putt either before dropping a shot on the sixth after finding a bunker off the tee.

A run of five pars left Woods seven over par and destined for an early exit, with the halfway cut projected to fall at level par.

At the top of the leaderboard, two-time major winner Dustin Johnson had set the clubhouse target on nine under par after adding a 67 to his opening 68, the former world number one dropping his only shot of the day on the first and responding to card six birdies.

Dustin Johnson has tied Cameron Young at the top of #TheOpen leaderboardpic.twitter.com/4GdM3LI63I

Talor Gooch, who has attracted ridicule for comparing the atmosphere at the second LIV Golf event to the Ryder Cup, was a stroke further back on seven under alongside former Masters champion Adam Scott.

Scott was four over par after eight holes of his opening round but recovered to shoot a level-par 72 and added a bogey-free 65 on Friday.

Former winner Mark Calcavecchia had hit the opening shot of day two at 6.35am in his final Open appearance.

Calcavecchia, who lifted the Claret Jug at Troon in 1989, struggled to an opening 83 and fared only one shot better on Friday to prop up the field on 21 over par.