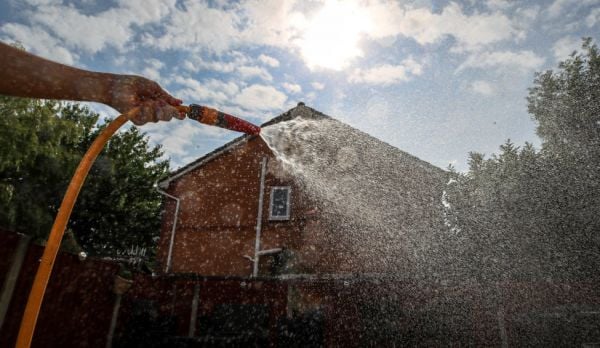 Irish Water has reminded people in several counties to be mindful of their water usage as some supplies are experiencing increased demand ahead of an intense heatwave.

A high temperature warning has been issued for the Republic beginning on Sunday, with people being advised to take precautions against getting sunburn or heatstroke.

The status yellow alert is set to be in effect from 6am on Sunday until 9pm on Tuesday, with temperatures of up to 32 degrees Celsius possible in places on Monday.

Irish Water’s James O’Toole said: “We are appealing to the public in Carlow and Kilkenny to be mindful of how they use their water at home, as we have had a very dry period recently and the temperature is set to soar this weekend.

“As the busy summer holiday period kicks in, many people will be outdoors a lot more, watering the garden or washing cars.

“We are just asking people to be sensible about how they use their water so that we have enough for everyone to use during the daytime and that the businesses of both counties can function to their optimal.”

Meanwhile, Dublin City Council has put contingency plans in place to protect the homeless from extreme temperatures in the coming days.

A council spokesperson said arrangements were in place with service providers to ensure that temporary shelter will continue to be available.

Outreach teams will ensure the distribution of water and sunscreen, the provision of shelter as required, and the encouragement of people to be sun aware.

The Department of Agriculture has issued a status-orange fire danger notice, rating the risk of forest fires as high until July 20th, with the risk expected to peak on Sunday.

“Arising from current weather patterns a high fire risk is deemed to exist in all areas where hazardous fuels such as dead grasses and shrub fuels such as heather and gorse exist,” it said.

“Members of the public intending to visit forests and other recreational sites are reminded to adhere to regulations regarding fire use.

“Forest visitors should not use barbecues or open fires at any stage. Vehicles must not be parked at site entrances or impede emergency service access to forest roads.”

The Road Safety Authority (RSA) is warning that road surface temperatures will rise significantly in the hot weather and could lead to the melting of surfaces.

It is also reminding people of the dangers posed by sun glare, which can result in drivers being temporarily dazzled or blinded by the intensity and brightness of the sun.

Due to climate change, we are expecting to see heatwaves become longer, more frequent and intense than in the past.

Localised power cuts are also a risk amid an increased chance that some heat-sensitive systems and equipment may fail.

The coming days will see if Ireland’s highest temperature on record — 33.3 degrees at Kilkenny Castle on June 26th, 1887 — is beaten.

“Due to climate change, we are expecting to see heatwaves become longer, more frequent and intense than in the past. This increase in heat, increases the odds of temperature records being broken,” he said.