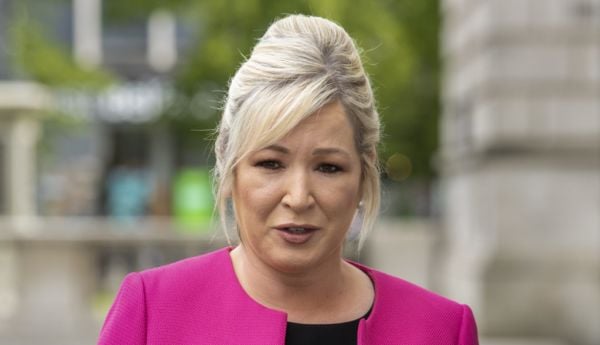 Sinn Féin vice president Michelle O’Neill has said she will brief senior US politicians on the need to restore powersharing at Stormont during a visit to Washington.

Ms O’Neill will travel to the US on Monday for a series of meetings with Congressional members and Irish American leaders.

She said the US remained a “critical partner” for peace and progress in Northern Ireland but added that the Conservative Government had proved it was an “untrustworthy partner”.

Powersharing in the North is in limbo after the DUP blocked the formation of a devolved executive following May’s election in protest at the Northern Ireland Protocol.

Unionists and loyalists are enraged at trade arrangements that have resulted in new checks on goods moving between Britain and Northern Ireland and have demanded that the UK government introduce changes.

A contentious Bill that would empower ministers to override aspects of the arrangements is currently moving through its stages at Westminster.

Sinn Féin emerged as the largest party in the Northern Assembly elections and Ms O’Neill would be in line to become First Minister if the DUP dropped its boycott of the devolved institutions.

Speaking ahead of her trip to Washington, she said: “Having travelled to Brussels, Dublin and London since our historic election in May, this is my first visit to Washington where I will emphasise the value of the relationship with the United States who remain a critical partner for peace and progress.

“I will tell politicians, diplomats and business leaders that the majority of people voted for change, and there is a strong commitment from a majority of newly elected MLAs and Assembly parties to work together and make politics work so we can deliver for the whole community.

“The continued stand-off by the DUP who are denying the public the democratic representation and leadership they are entitled to cannot continue.

“The political cover by the Tories must be robustly challenged. The Good Friday Agreement must be both applied and upheld in full.”

Ms O’Neill said a devolved government was needed to set a budget to assist families and workers struggling with the cost-of-living crisis.

The Bill aims to provide the promise of immunity from prosecution for perpetrators of Troubles offences who agree to provide information to a new truth body and move to end conflict-related civil cases and inquests.

The legislation has been criticised by all political parties in Northern Ireland as well as victims’ and survivors’ groups and the Irish Government.

Ms O’Neill said: “It is important that all those in the US who value the close political, economic and cultural bonds with the island of Ireland understand what is now at stake after a quarter-century of peace and stability.

“It is vital that we underscore the reckless actions of the British government who are trying to sabotage our political agreements through their anti-Good Friday Agreement agenda which is disingenuously dressed up in a pro-agreement rhetoric.

“They have abandoned victims and survivors and taken a fundamental departure away from the Stormont House Agreement by legislating unilaterally in order to protect the interests of the British State itself.

“They are legislating to breach international law and denounce the protocol which limits the impact of their hard Brexit on society and business here, and prevents a hard border.

“The protocol is supported by a majority of MLAs because it is working, and gives us access to the EU single market which is helping business export [and] create more jobs and economic success.

“They do this at a time of major conflict in Europe. The actions of the Tory party in Westminster have demonstrated they are an untrustworthy partner in Ireland and internationally. Their actions remain a challenge to all who value our agreements.

“Now is the time to assert the primacy of politics, the honouring of agreements, and respect for international law which protects the all-island economy and prevents a hard border on the island of Ireland.”